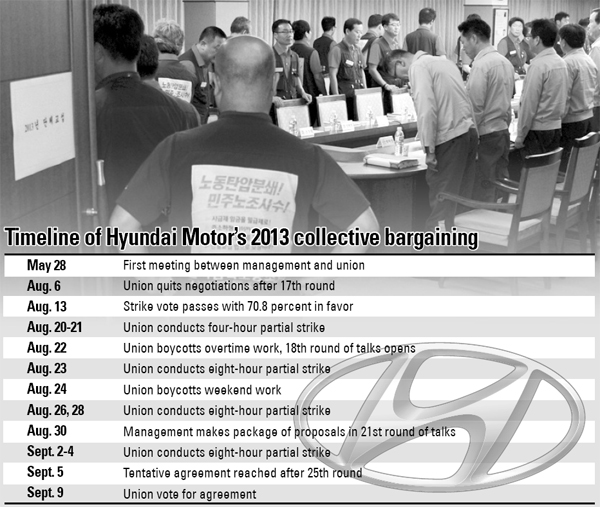 Hyundai Motor’s management and workers reached tentative agreement Thursday on a new contract to end a series of strikes, but questions remain whether the agreement will be approved by the union at a vote on Monday.

In the 25th round of collective bargaining talks on Thursday in Ulsan, 101 days after negotiations began in May, the two sides reached an interim agreement. The union originally scheduled a 12-hour strike yesterday, but it was cancelled.

“Both labor and the management recognize a difficult business situation caused by a global economic slowdown and a weak yen,” the company said in a statement. “We will respond to our customers’ support by developing an advanced labor-management culture.”

Under the tentative deal, Hyundai workers will get a hike of 97,000 won ($88) in their monthly base pay, with various type of bonuses and incentives, including a one-time bonus that is equivalent to 350 percent of their base pay plus 5 million won, another bonus of 3 million won to encourage workers to reach business goals, and a special bonus for adopting a two-daytime shift system.

The company didn’t accept the union’s demands to distribute 30 percent of Hyundai’s net profit to workers, giving 10 million won to employees whose children didn’t go to college, or extending the retirement age to 61. The management said those demands were excessive.

Negotiations have picked up after the management presented a package of proposals on Aug. 30.

The negotiation had a twist at the end when the union asked the company to drop a compensation lawsuit filed against two union officials accused of stopping an assembly line in Ulsan in April while protesting weekend work payments. Last week, an Ulsan District Court ruled that the two union officials need to pay a combined 300 million won to the company in damages.

The two sides agreed to negotiate that issue separately, later.

The tentative agreement goes up to a vote by the 46,000-member union on Monday with more than 50 percent approval needed for final confirmation. The union yesterday distributed a leaflet to its members encouraging them to vote for the agreement and claiming that the deal will give each member an average of 28 million won.

Militant groups in the union don’t like the agreement. Hyundai’s union reportedly has seven factions, and three are described as militant, according to industry insiders. The last voting down of an interim agreement occurred in 2008.

Since employees first put down their tools Aug. 20, Hyundai suffered 10 partial strikers and boycotts of weekend work. Hyundai said a total of 50,191 vehicles weren’t produced because of the industrial actions, and it estimated the cost to the company at 1.02 trillion won.

Meanwhile, Hyundai’s small affiliate Kia Motors is also expected to conclude its collective bargaining next week. After a ninth round of talks broken down, the union called for an eight-hour partial strike yesterday. Kia estimates 124 billion won worth of damages have occurred from six partial strikes.