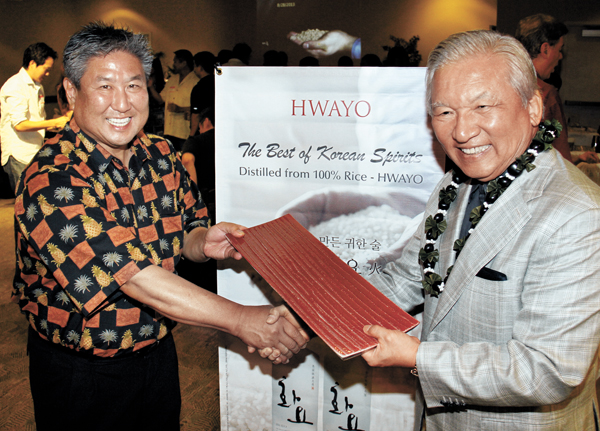 HONOLULU - The CEO of Kwangjuyo Group, Cho Tae-kwon, wants to make hansik (Korean cuisine) an international favorite, and of course he wants his premium soju, Hwayo, to be one as well. To further those ambitions, he brought his liquor to Hawaii, a cultural melting pot in the Pacific where fusion cuisine is prepared by adventurous chefs. He enlisted Alan Wong, head of a group of high-end (and highly rated) restaurants in Honolulu, to prepare menus for which his soju would be a fitting accompaniment - on the rocks, straight up and as part of a cocktail.

Under the motto “Tableware, food and liquor are one,” Cho launched Hwayo ten years ago. The name translates to something akin to “noble liquor governed by fire.”

The soju made its debut at the Pineapple Room restaurant belonging to Wong at the Ala Moana Center in Honloulu.

Twenty head chefs of popular restaurants in Hawaii, politicians including Representative Calvin Say of the Hawaii House of Representatives, and 100 other officials of restaurant businesses joined Cho and Wong for the launch.

“It is an honor to launch Korea’s high-quality soju, Hwayo, in Hawaii, where many cuisines intermingle,” Cho said. “I hope this is an opportunity for Korean culture to glow through a Korean liquor that goes well with Korean cuisine.”

Asked why he chose Hawaii for his first foray into international markets, Cho said he saw the possibility of developing a good market in Hawaii in a short time, although he conceded that inroads in U.S. mainland markets would be a harder task. “Eight million people from all over the world visit Hawaii every year,” he said. “We might find strategies for other regions as well if Hwayo makes its name known here.”

Wong agreed. “I tasted Hwayo for the first time in Korea last year, and I thought it matched Hawaiian cuisine, which has many fused Asian elements. I invited Cho to launch Hwayo in Hawaii.”

Cho makes no effort to hide his ambitions. “I will make Hwayo one of the world’s great liquors, along with England’s whisky and Russia’s vodka,” Cho said. “Traditional Korean liquor with high-quality Korean dishes will be introduced across the globe.”

Hwayo also featured at the Hawaii Food and Wine Festival earlier this month. Cho Hee-kyung, the CEO of Bicena, a restaurant started by the Kwangjuyo Group, took part.

Cho started introducing Korean cuisine and culture to the United States by hosting “Five colors and beauties and Korean flavor: Napa dinner party” in Napa Valley, California, in October 2007. He also staged a “Banquet for globalizing hansik” in Los Angeles last February, with the ingredients and dishes all transported there from Korea.

Kwangjuyo is a traditional pottery manufacturing company with a long history and high reputation. Established in Icheon, Gyeonggi, an area famous for ceramics, the company traces its roots to the government agency that once supplied ceramics to kings and queens. They use natural materials and a traditional, handmade manufacturing process, but their designs seek to keep in touch with modern ideas. Kwangjuyo ceramics are often used at government banquets and have also emerged as one of the favorites for brides-to-be when they shop for their weddings and married life.

Cho is considered somewhat of a missionary for globalizing Korean cuisine as well as promoting his company’s products. His guiding rule, he says, is that to promote Korean food you have to also promote Korean culture.