Knuckleballer gets late shot at the pros

Knuckleballer gets late shot at the pros 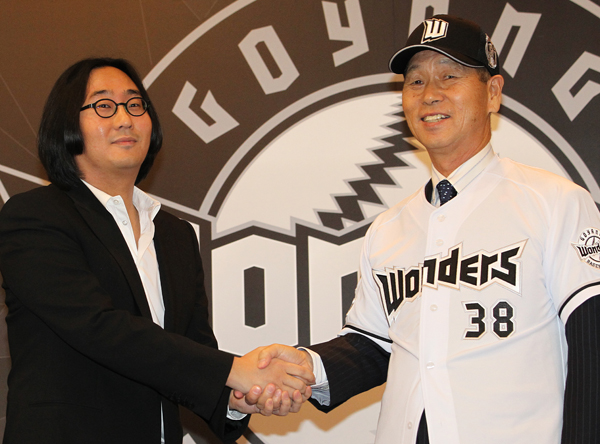 Heo Min, 37, is the owner of the Goyang Wonders, an independent team playing in the Korea Baseball Futures League.

Although it’s too early for him to be having a midlife crisis, he’s going to be living out the dream of many young boys - pitching for a pro baseball team in the United States.

It’s not the majors, but the Wonders announced recently that Heo would be joining the Rockland Boulders of the Can-Am League, more formally called the Canadian American Association of Professional Baseball.

“He’s been trying to be a baseball player for the past eight years,” his Korean club said.

The knuckleballer is already a successful entrepreneur in the computer game industry and founded Korea’s first independent ball club in 2011. And for the past few years, he’s been developing his knuckleball - a darting, dancing slow pitch that, if mastered, can extend the careers of pitchers far past the age when most fireballers have hung up their gloves.

His mentor in the project is the manager of the Wonders, 71-year-old Kim Sung-keun, who goes by the respectful nickname of Yasin, or “baseball god” in English. Kim won three Korea Baseball Organization championships skippering the SK Wyverns before taking the job with the Wonders.

When Heo established his club, he sought out Kim both to manage it and perhaps for a more personal reason as well.

“My challenge will be to play in a higher-level league,” Heo said. “I really have to thank Kim Sung-keun for teaching me how to play baseball the last two years.”

Although Kim is Heo’s employee, he has become a father figure to the aspiring right-hander. Moving from the Wyverns to a minor-league manager may have been a comedown in status, but Kim’s contract terms are rumored to be in the same ballpark as big-league managers, who generally earn from 300 million to 400 million won annually ($274,000 to $365,000).

Heo’s passion for baseball led to his interest in an independent team and league. In Korea’s majors, teams are all run by conglomerates such as Samsung and Kia Motors, but most teams operate at a loss. The corporate bosses see their teams as tools to advertise and improve the image of the companies.

With Heo’s support and Kim’s managerial cunning, the Wonders have notched a .600 winning percentage in the Futures League; 11 Wonders players who weren’t able to crack the big leagues in the past have since contracted with KBO teams in the last two years after playing under Kim. The Wonders demanded no compensation for the players who made the jump.

“The reason I developed the Wonders was to contribute to society through baseball,” Heo said. “Now, many players who struggled in baseball but who desperately wanted to get back on the field are taking their second chance.”

And being on his own field of dreams was always on his mind. After being admitted to Seoul National University in 1995, he joined the university’s baseball team. After graduating, he set up a game-developing company, Neople, in 2001. In 2008, he sold the company to Nexon Korea for 300 billion won at the tender age of 32.

Because of injuries he suffered while playing college ball, he knew it would be impossible to regain any sort of competitive fastball. In 2009, two years before founding the Wonders, Heo traveled to the United States and learned how to throw a knuckleball from Phil Niekro, then 70, who won 318 games in his 24-year MLB career and is now in the Baseball Hall of Fame.

He spends about 2 billion won per year to run the Wonders. The team has never made a profit, but Heo says he doesn’t care. “I love baseball very much,” he said.

That love may be tested a bit, though. Heo made his debut against the Newark Bears on Sept. 1, starting the second-last game of the season. He was roughed up, allowing five runs on five hits with four walks in three innings.