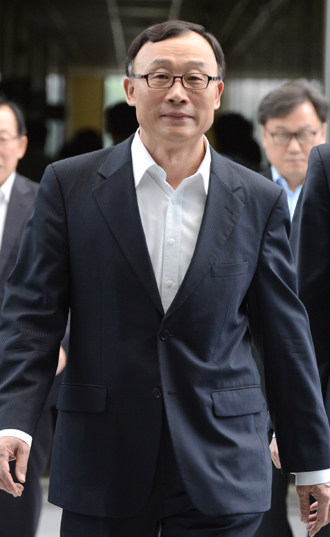 The criminal justice system was thrown into confusion early yesterday by a news report that disclosed an out-of-wedlock son of chief prosecutor Chae Dong-wook in the middle of a high-profile insurrection case and charges that the nation’s spy agency interfered in last year’s presidential election.

The Chosun Ilbo reported yesterday that the 54-year-old Prosecutor General has a 10-year-old son from an extramarital affair with a woman in July 2002 when he was working as the chief of the narcotics investigation department of the Supreme Prosecutors’ Office.

When the news was first reported, Chae told reporters “I’ve never heard of it,” but he didn’t deny the report or threaten legal action for defamation.

But as the news spread, he released an official statement around noon yesterday to his prosecutors denying the report.

Political analysts speculated that someone in the Blue House or government wanted the prosecutor general replaced because of his handling of the investigation into the allegations that the National Intelligence Service meddled in the last year’s presidential election.

In the statement to his prosecutors, Chae said, “The Chosun Ilbo’s report about me isn’t true. As the prosecutor general, I will keep focusing on my work based on the country’s laws and its principals though there are people trying to shake the [prosecution] organization.”

According to the Chosun Ilbo report, Chae met the mother of his alleged son in 1999 when he was a senior prosecutor at the eastern branch of the Busan District Prosecutors’ Office. Apparently they continued their affair in Seoul.

The report said the son attended a private elementary school in Seoul and was preparing to transfer to a school in New York when the confirmation hearing for Chae was held in April.

According to the Chosun Ilbo report, the son departed for his new school in New York on Aug. 31.

In his confirmation hearing, Chae reported that his assets amounted to 1.25 billion won ($1.14 million), which included a 32-pyeong (1,138.7 square feet) apartment worth 654 million won in Irwon-dong, southern Seoul and 440 million won in savings.

Chae rented out the apartment and currently lives in a nearby apartment with his wife and a daughter, having paid jeonse, or a lump-sum deposit, in lieu of rent. The jeonse was 450 million won.

If the alleged son’s housing was paid for by Chae, he made a false report about his assets. One of the reasons the Blue House named Chae as prosecution chief was because he was considered relatively clean in terms of financial background and also hadn’t dodged the draft.

“We never knew about this,” a spokesman of the Blue House told the JoongAng Ilbo. “If we knew about this, how could we possibly have appointed Chae as the prosecution chief?”

But there is contrary speculation that the Blue House, National Intelligence Service and officials of the ruling party were aware of Chae’s personal background, and details have now been leaked by a group that doesn’t want him leading the prosecution anymore.

When the prosecution started investigating charges that the National Intelligence Service interfered in last year’s presidential election to help the candidacy of Park Geun-hye, who won, the relationship between the prosecution, the ruling party and the government became strained.

There are rumors that Kim Ki-choon, Park’s chief of staff who served as justice minister and prosecutor general previously, and Hong Kyung-shik, senior secretary for civil affairs, were displeased by recent behavior by the prosecution.