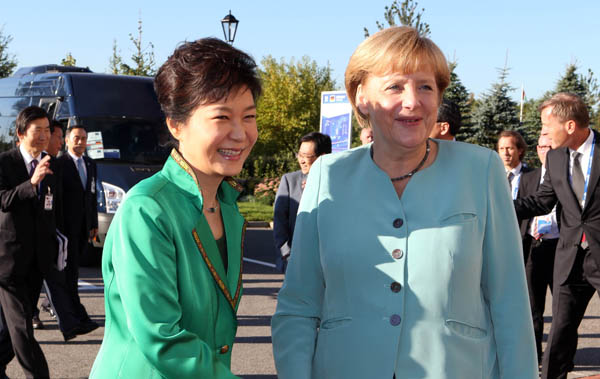 President Park Geun-hye held bilateral talks with German Chancellor Angela Merkel on the sidelines of the G-20 summit in St. Petersburg, Russia, and the two obviously hit it off.

“As the host of this summit arranged my room close to yours .?.?. it feels good to see you, like visiting a next-door neighbor,” Park told Merkel in Korean translated into German, according to the Blue House. “Madam, you were the first person to phone me to congratulate me [on her victory in the presidential race] and also the first to invite me to your country .?.?. It is very nice to see you here in St. Petersburg.”

The two woman leaders have several things in common in their political career. Each is the first female leader of her country and both have headed conservative parties.

They also have a long friendship that goes back 13 years and have met four times since 2000, including at yesterday’s talks.

Park first met Merkel in Germany in November 2000 as then-deputy chairwoman of the Grand National Party and as a member of the National Assembly’s Unification and Foreign Affairs Committee. They had a one-hour talk at the time.

After Park became the head of the Grand National Party in 2004 and Merkel became Chancellor in 2005, they exchanged letters.

In September 2006, right after Park stepped down as head of the GNP, she visited Belgium and Germany and met with Merkel.

“The stance of Chancellor Merkel’s economic policy or foreign affairs policy is similar to that for which I strive, and her personal principle of keeping promises is exactly the same as mine,” Park wrote in her autobiography.

After a 30-minute meeting with Merkel, Park held another bilateral talk with Kazakh President Nursultan Nazarbayev to discuss development of diplomatic ties with the country.

Nazarbayev mentioned the economic partnerships built between the two countries, particularly since the Lee Myung-bak administration, including Korea’s building of a power plant in Kazakhstan, according to the Blue House.

Park was given the chance to deliver a speech at the second session of the G-20 summit yesterday, requested by the Russian government, about her so-called “creative economy” policy.

After the summit ended, Park met with Russian President Vladimir Putin to discuss various issues on the Korean Peninsula.