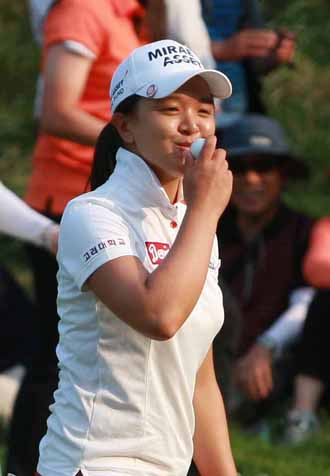 A new driver - Kim Se-young reacts after carding a hole in one on the 17th and winning a new Mercedes-Benz SUV during the final round of the Hanwha Finance Classic at Golden Bay Golf & Resort in Taean, South Chungcheong, yesterday. Kim, 20, beat Ryu So-yeon on second playoff hole to win the 300 million won ($274,586) first prize. It was Kim’s second win of the season after her victory at the Lotte Mart Open in April. [NEWSIS]