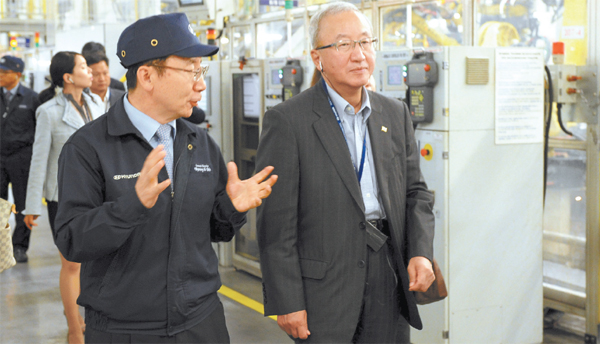 “Although there were vivid differences at the G-20 summit between emerging and advanced economies over a stimulus exit strategy, the Korean government played a significant role in bringing the two sides together,” said Hyun Oh-seok, the country’s deputy prime minister for the economy and finance minister.

“President Park [Geun-hye] pointed out that at a time when global economies are closely connected, the economies of developed countries will be affected if emerging countries struggle,” Hyun said after returning to Seoul yesterday from St. Petersburg, Russia.

According to the Ministry of Strategy and Finance, Korea urged developed countries to carefully adjust monetary policies by taking into account the potential negative effect on emerging countries and the global financial market, and sought cooperation among monetary authorities to ensure financial stability.

“The U.S. emphasized the need for an exit strategy to normalize the global economy and major developed countries agreed,” the ministry said in a statement. “President Park then explained that there should be a sense of community and emerging countries should be taken into account. To this, delegates from many emerging countries like Turkey, Brazil and India nodded and, interestingly enough, Germany also agreed.”

Although a U.S. jobs report announced Friday was weaker than forecast, there has been growing speculation that the U.S. central bank will start cutting back on its asset-purchasing program, which could trigger an exit of foreign investment in emerging markets. Concern over tapering has affected the currencies of India and Indonesia and roiled stock markets in emerging countries.

“Although not all concerns from the quantitative easing have addressed, it could be said that some international understanding has been achieved,” said Hyun.

He said the Korean government has a plan and will manage policy according to the timing and how the international financial market moves.

“In the process of normalization, there could be short-term shock to emerging countries [due to capital outflow],” Hyun said. “As seen in the past few weeks, the impact seems to differ by country... depending on how emerging nations prepare themselves and what policies they implement [to minimize shock].”

The minister said the G-20 summit in Russia contributed to easing concerns about risks that could surface in the course of a global recovery.