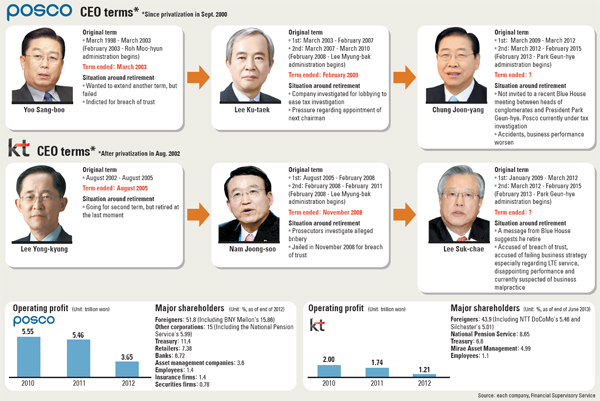 When the National Tax Service conducted “special” investigation of Posco last week, an employee at the nation’s largest steelmaker responded to speculation that the tax investigation is intended to force out Chairman Chung Joon-yang.

“It’s about that time,” said the employee, who asked for anonymity.

Posco and the NTS denied the investigation is intended to pressure Chung, but some officials said the Blue House passed precisely that message to the chairman last week. Chung has about 18 months left in his term.

The situation seems to be no different at KT, the country’s leading telecommunications service provider. According to media reports, the Blue House recently asked KT Chairman Lee Suk-chae to retire and he refused.

Posco and KT, two former public enterprises, are in turmoil again with the reported pressuring of their CEOs coming at a time when both of the companies face critical business decisions.

KT entered the auction for new frequencies for its LTE service and acquired the bandwidth it wanted. It is now developing a long-term plan.

Posco has faced plummeting steel demand during the global economic slump. Its operating profit to sales plunged to 5.7 percent last year, compared to the 20 percent range in its heyday.

Industry observers said uncertainty surrounding the two CEOs could cloud the country’s economy. Posco is the nation’s sixth-largest conglomerate with 81 trillion won ($74.1 billion) in assets, while KT is No. 11 at 35 trillion won.

The history of a “vicious cycle” related to government pressure is long.

Posco was privatized in September 2000, although the state-run National Pension Service holds a 5.99 percent share. Foreigners account for more than half of the company’s shares.

After privatization, former Chairman Yoon Sang-boo failed to serve consecutive terms as he was accused of a breach of trust in the acquisition of a small firm at a big price. The transaction reportedly was ordered by an official from the Kim Dae-jung government in March 2003.

Yoo’s successor, Lee Ku-taek, also quit his job a year before his term expired after prosecutors opened an investigation into whether Posco tried to influence a tax investigation.

The current chairman has seen government interference from the start. Before Posco’s CEO candidate recommendation committee selected Chung, another candidate claimed he was pressured by former President Lee Myung-bak’s closest aide to back off.

The situation is similar at KT, which became a private company in August 2002. While the government has no share of KT, pressure has always been an issue. Former CEO Nam Joong-soo was removed because of a bribery case in 2008 during the first year of the Lee administration, but many speculated Nam was also punished because he was close with former President Roh Moo-hyun.

When KT was in search of a new CEO in 2009, the current KT Chairman Lee was not qualified to apply for the position. At the time, he was working as an outside director of rival company SK C&C. Under KT’s own regulations, hiring officials from rival companies as CEOs was banned. However, KT’s board of directors quickly changed the company’s regulation that allowed Lee to become one of the candidates for the vacant top spot.

KT in July recruited former Saenuri lawmakers Hong Sa-duk and Kim Byung-ho as advisers. Hong and Kim are known to be close aides to President Park Geun-hye. The hiring of the two lawmakers was considered a move by the KT chairman to curry favor with the president and extend his tenure at KT by using the two politicians to lobby the Blue House.

“In principle, the government should not intervene in a private company,” said Choi Jeong-pyo, an economics professor at Konkuk University. “At this moment, the government doesn’t want to support the current chairmen.”

In addition to the CEO speculation, the situation for KT and Posco has worsened. Posco suffered a series of accidents at its plants in Pohang and Yeongwol, Gangwon, while its Daewoo International affiliate is under investigation for tax evasion involving maritime patrol aircraft. Other projects the company started under the Lee administration also went bad.

What’s more concerning is the internal breakdown. At KT, when the reshuffling season nears, it has become almost expected that an executive will send an anonymous letter asking an investigative institution to look into a fellow executive’s wrongdoing.

“CEOs whose terms are not stabilized focus only on short-term performance,” said a former high-ranking executive at KT. “As the government’s control takes root, executives snoop into politics to preserve their positions.”

Experts said that in order to end the vicious cycle, a company’s board of directors needs to have autonomy from the government and a strong internal system.

“Because the importance of these two companies, it is essential for CEOs to share the government’s vision,” said Kim Jung-sik, an economics professor at Yonsei University. “However, healthy internal systems should be set up in advance, which would enable professional leaders to independently manage the company and hold those who are responsible for poor performance accountable.”

Kim Sang-jo, a Hansung University professor who also serves as director of Solidarity for?Economic?Reform, said these companies should cultivate a culture that fosters future CEOs and develop a system to determine successors through internal and external evaluation and inspection.

“In this personnel appointment system that selects successors after a problem occurs, no one is free from rumors of external pressures and that they lack management skills,” Kim said.