Ssangyong Motor is steadily building sales overseas, as the nation’s fourth-largest automaker commits to emerging markets and beefs up its global sales network.

The company, now part of India’s Mahindra Group, has been the most successful automaker in Korea this year, the only local automaker to increase domestic sales in the first half of 2013.

And in August, Ssangyong sold 5,158 units, up 39.2 percent from a year earlier thanks to the introduction of the New Korando C. The face-lifted version of the popular sport utility vehicle received 4,000 preorders for 20 days since its launch earlier last month.

On top of rising domestic sales, Ssangyong sold 53,394 units overseas in the first eight months of the year, up 16.5 percent over a year earlier.

After resuming a two-shift system at its SUV assembly line in May, Ssangyong said it sees this year as a springboard to expand globally.

As a part of that effort, Ssangyong held a Global Distributor Conference on Jeju Island last week with some 100 foreign distributors from 47 countries. Entering its fourth year, the event has been important for overseas dealers to get marketing information and learn about Ssangyong’s business plans and new products.

For this year, the distributors showed great interest in Ssangyong’s New Korando C. The model is scheduled to be sold in key export markets such as Europe, Russia and China.

The global distributors of Ssangyong said that they are positive that the automaker will reach its future goal of doubling sales by 2016.

“Five years ago, Ssangyong was kind of an ‘I don’t know’ brand,” said Yerkeblan Okayev, chairman of the supervisory board at Allur Auto, the official distributor of Ssangyong vehicles in Kazakhstan. “But its model range has now changed, and it gave us good opportunities.” 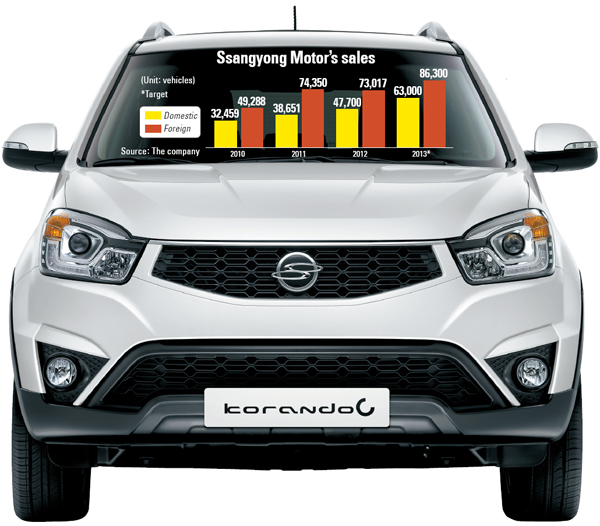 Ssangyong said that Kazakhstan is a core market. It is planning to sell a face-lifted version of the Actyon, known as the Nomad in Kazakhstan, for the remainder of this year on a full CKD (complete knockdown) basis, meaning the vehicle will be assembled locally.

“Kazakhstan is the country where most Chairman sedans are sold besides Korea,” Okayev said. “People here know Ssangyong is a Korean brand and also its work with Mercedes-Benz in the past.”

According to distributors, Ssangyong is building a strong reputation for “specialist” off-road vehicles. It is also appealing to young people and families who enjoy outdoor activities.

For instance in Chile, where Ssangyong ranks 11th among 62 auto brands with a 2.6 percent market share, Ssangyong’s brand value is more or less equal to that of Japanese competitors like Toyota, Mitsubishi and Nissan, according to Derek Michael Fox Munoz, managing director of Ssangyong Motor Chile.

The foreign distributors gathered in Jeju did admit that the Ssangyong brand isn’t fully recognized by all consumers because it’s a latecomer to the global market. However, they see this as an opportunity because there’s a lot of room to grow.

In Russia, Ssangyong exported 32,328 units last year. According to Alexey Volodin, the Managing Director at Ssangyong Motor Russia, the brand is “still developing.”

“In general, Russian people perceive Ssangyong as a quite good Korean automaker,” said Volodin. “For our prospective customers, they know something about Ssangyong, but some are not ready to buy it.”

The Russian distributor, which was named Best Distributor of the Year by Ssangyong for three consecutive years, said its job is to turn people who know the brand into people who like it.

While foreign dealers commit to upgrading the brand’s value and reputation, Ssangyong said its future task is to diversify its markets.

Ssangyong hopes its vehicles will be sold in 120 countries by 2016, about 10 countries more than currently. It will tap into Southeast Asia and Africa too.

“Since its merger with Mahindra, Ssangyong Motor has been taking active steps to become a global SUV manufacturer,” said Ssangyong Motor CEO Lee Yoo-il. “We will secure stable demand in the global market by diversifying our product portfolio, including small-sized SUVs, and at the same time further strengthen our product competitiveness by fulfilling customer requirements.”