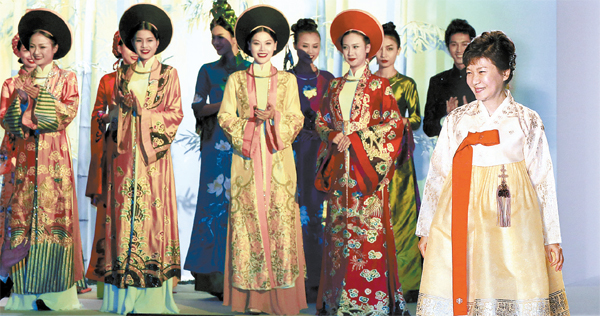 After meeting with leaders of the Group of 20 nations in St. Petersburg, Russia, President Park Geun-hye traveled to Vietnam and is scheduled to meet President Truong Tan Sang today in Hanoi.

After her debut in multinational diplomacy in Russia for the G-20 Summit, Park is expected to put her sales diplomacy tactics to the test to promote economic cooperation with Vietnam during her five-day official visit.

She and her party arrived in Hanoi Saturday. She was scheduled to attend an “economic cooperation dinner” at the Grand Plaza Hanoi Hotel yesterday. That party, aides said, contained the largest business delegation to join a Korean president on a foreign trip.

Her entourage includes 79 business leaders and representatives of business groups, including 40 from medium-scale enterprises, the Ministry of Trade said. Large conglomerates have sent 18 persons on the trip. Some 71 persons were in Park’s delegation that went to Beijing in June, including 33 leaders of midsize companies. The Trade Ministry said the increase in the number of such firms’ representatives reflects a presidential campaign pledge to increase government support for smaller enterprises.

She attended a fashion show yesterday with Nguyen Thi Doan, the vice president of Vietnam. The show highlighted the national costumes of Korea and Vietnam, hanbok and ao dai.

She and President Truong Tan Sang are expected to release a joint statement after their meeting today.

Park’s main discussion points, aides said, will be how to increase economic cooperation, including a review of progress on a Korea-Vietnam free trade agreement now under negotiation, and the strengthening of nuclear power and industrial cooperation.

The two nations established diplomatic ties in 1992, and Park’s visit is the fifth by a Korean president there.

This visit is also a continuation of past presidents’ reconciliation gestures to Vietnam because of South Korea’s participation in the Vietnam War during the presidency of her father, Park Chung Hee. She is scheduled to pay her respects at the Ho Chi Minh Mausoleum, the memorial in Hanoi dedicated to the former leader.

Park heads to the economic center of Ho Chi Minh City on Tuesday, where she will meet the city’s mayor and other officials, participate in an economic cooperation forum and meet with overseas Koreans residing there.

Her trip to Vietnam is her third bilateral trip since her inauguration in February, following visits to the United States and China. She will return to Seoul on Wednesday after her 11-day trip abroad.