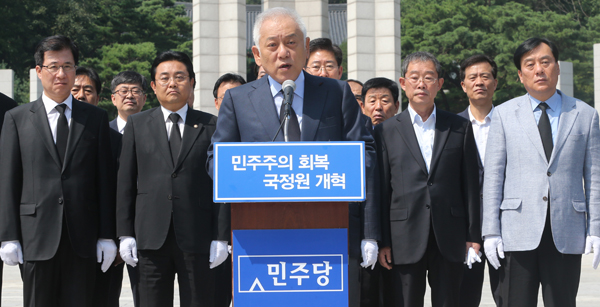 Reform call - Kim Han-gill, at podium, chairman of the Democratic Party, vowed to reform the National Intelligence Service yesterday when the party leadership gathered at the April 19th National Cemetery in northern Seoul. Kim criticized the ruling Saenuri Party for having roots in the 1960 military coup and dictatorship; he said it has denied the history of democratization and relied on McCarthyism to oppress the opposition. “The roots of the Democratic Party and the Saenuri Party are clearly different,” Kim said. “Our Democratic Party succeeds in the lineage of Kim Ku, Shin Ik-hui, Kim Dae-jung and Roh Moo-hyun, while the Saenuri Party is a successor of Syngman Rhee, Park Chung Hee, Chun Doo Hwan, Roh Tae-woo and Lee Myung-bak. The Korean people drove out the authoritarian government and established democratic government through the April 19th uprising. But the dream of democracy was crushed a year later by the May 16 military coup [led by Gen. Park Chung Hee]. Many people had to fight against the Park Chung Hee dictatorship as if they were independence fighters sacrificing themselves.” [NEWS1]