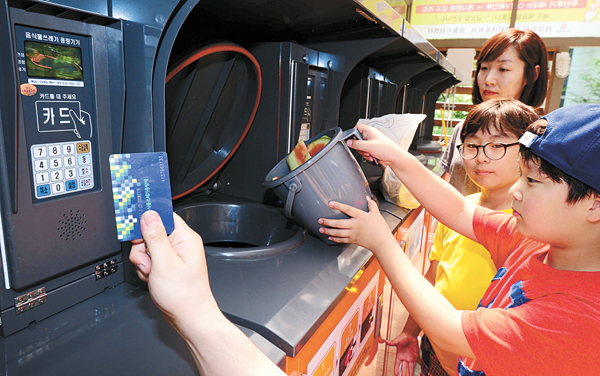 Residents at an apartment complex in Seoul’s Songpa District dispose of their garbage using an RFID card that tracks their use of the facility. [NEWSIS]

A 29-year-old Gwangjin District resident surnamed Jeong bought an in-sink garbage disposal system online; he didn’t like the 100-meter (330-foot) trek to the garbage bins at his apartment complex and the foul odors he encountered.

“The disposal system was about 500,000 won [$456],” Jeong told the JoongAng Ilbo. “But it was worth being able to get rid of the stress of handling food garbage.”

But he recently learned that the disposal he purchased wasn’t authorized by the Ministry of Environment.

The Revised Volume Rate Food Waste Collection System, which applies to food waste from households and businesses, will mark its 100th day on Sunday. But it’s not universally popular; some residents have substituted disposals for the approved system and some just flush food waste down the toilet.

Under the old system, residents dumped garbage into bins in their housing area. No matter how much you threw away, you were charged the same amount as everyone else. The new policy gave each housing area a choice of three options for food waste disposal, all of them involving payments tailored to the amount of waste a household generates.

The first option is to buy a garbage bag for food waste, which looks like the bags currently used for non-food trash. The more food waste you generate, the more bags you have to buy. 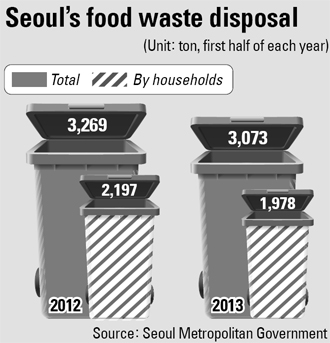 The second is the RFID system, in which you activate the lid of a garbage bin with an ID card, and the bin weighs your garbage. You put a certain amount of food waste into the trash bin, and the RFID chip installed in the bin measures the weight of your food waste and notifies the relevant administrative authorities to add the appropriate charge to your monthly fee. The idea is to conveniently measure the amount of food waste, send the data to the property management office of the apartment complex or local district office, and everyone pays for the amount of food waste they have generated.

The third system also uses a “smart bin” to measure how much food waste each resident throws away, but all the residents pay an equal share of the total amount charged to dispose of the garbage.

In January, the Ministry of Environment designated about 20 types of garbage disposal systems and began allowing their use in June. But the types the ministry approved only reduce the volume of the waste typically by about 20 percent, and the remainder still has to be disposed of. No system that grinds all the garbage down to the point that it can flow through the pipes has been approved.

“We can only say we expect all residents to be moral because we can’t check every household,” said an official of the Seodaemun District Office in central Seoul.

“The problem isn’t only grinders. Some people throw out food waste in the alleys after putting it in unauthorized trash bags,” a resident in the Gangseo District said. “And I’ve heard that it is also a burden for many merchants to pay extra money for garbage bags for food waste.”