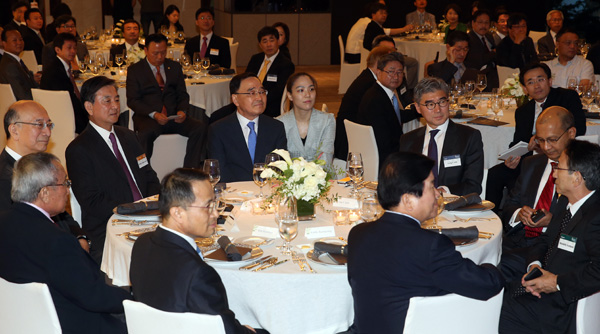 A welcome dinner to kick off the 16th J-Global Forum brought together journalists, academics and other experts from nine countries at the Westin Chosun Hotel in Seoul yesterday evening. By Kim Sang-seon

Prime Minister Chung Hong-won said Asia is rising as the engine of world development” at a welcome dinner yesterday to kick off the 16th J-Global Forum, which brings together journalists, academics and other experts from nine countries at the Westin Chosun Hotel in Seoul.

He said a consensus on the formation of an East Asian community is gradually increasing and steps are being taken for a realization of peace and prosperity in East Asia.

The annual J-Global Forum is sponsored by the JoongAng Ilbo, the JTBC television network and the Yumin Cultural Foundation. About 200 experts from nations including the United States, China, Germany, France and Indonesia will sit down today to discuss this year’s theme, “A New Model for Regional Cooperation and Integration in East Asia.”

“The situation asks for proactive support of Northeast Asian countries to establish new order in the region and to pioneer our shared future,” Chung continued. “This region comprises 22 percent of the world’s population, and its economy is a fifth of global GDP,” he said, adding that trade volume among China, Japan and Korea has increased fivefold over the past decade.

“The Korean government is very dedicated to ensure peace on the peninsula,” the prime minister said. “And if North Korea renounces its nuclear program and decides to be a member of the international society, we could pioneer a new era on the Korean Peninsula.”

Chung returned last week from visits to Bahrain, Qatar, Sri Lanka and Turkey, where he said he had met with the leaders of each country, telling them this was “the era of global interaction” and bolstering friendship and cooperation in politics, economics, society and culture.

The dinner was also attended by about 60 other guests, including former Prime Minister Lee Hong-koo, chairman of the Yumin Cultural Foundation, and Hong Seok-hyun, chairman of the JoongAng Ilbo and JTBC.

The three sessions of the forum tomorrow will discuss precedents in Germany and France to deal with disputes in East Asia over history and territory; new dimensions in U.S.-China relations; and challenges and opportunities for an East Asian community.

Speakers at the sessions will include Wieland Wagner, the New Delhi bureau chief of Der Spiegel; David Pilling, the Asia editor of the Financial Times; and Feng Zhu, an international studies professor at Peking University and deputy director of its Center for International and Strategic Studies.

The forum has been held since 1996, at first every two years and then annually. Until 2007 it was called the Asia Press Forum, and it was renamed that year for its 10th anniversary celebration.