Being human focus of robot drama

Being human focus of robot drama 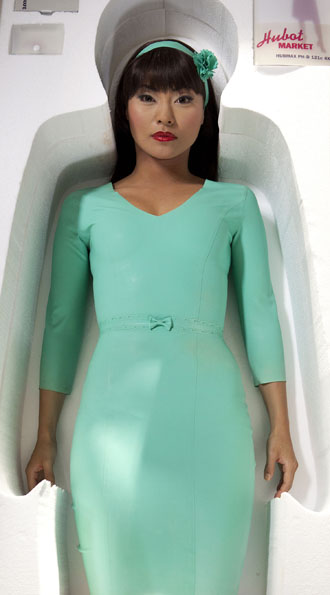 What do you call a robot with human emotions? “A hubot,” says the writer of the hit Swedish science-fiction TV series “Real Humans,” which has taken the world by storm.

“Well, we had to call them something,” said Lars Lundstrom, referring to the show’s protagonists; robots capable of human emotions.

In Sweden, the word has not only become a common term, it’s even made it into the dictionary, less than a year after the show’s debut.

Although hybrid jargon on these sorts of shows can be somewhat predictable, the plot of the 10-part Swedish drama was anything but, as evidenced by Lundstrom’s winning the award for best screenwriter at this year’s Seoul International Drama Awards.

While in Seoul last week to pick up his prize, joined by Harald Hamrell, the show’s director, the duo talked about how they brought the androids to life.

“I got the idea a long time ago, maybe 2006,” said Lundstrom. “I dropped the idea to some people and they said it was impossible,” he said, because similar sci-fi dramas haven’t been tackled before in Sweden. “It sounded too odd.”

Lundstrom says he understood the reservations. When you explain a drama about robots, “It feels cold. “One person said you can’t spend 10 hours looking at robots, it’s going to bore us to death. Nothing’s going to happen.” But that’s where Lundstrom disagreed. “This was going to be a very emotional series. It deals with emotions.”

Luckily, there was another man who understood Lundstrom’s vision - producer Henrik Widman. Once Lundstrom and Widman teamed up, and Hamrell joined the team too, production got underway in 2009. The pilot aired in 2010 on Sweden’s primary TV station SVT1, and eventually that led to a full season.

Since then, “Real Humans” has been picked up by channels all over Europe and the rest of the world. The series has been sold to more than 50 countries, from France to Australia, as well as Korea, where it was broadcast on KBS2 this spring.

“Real Humans” is set in a parallel universe, in the Sweden of today rather than 50 or 100 years from now. Although it tackles futuristic notions, the show is “something that can happen now,” said Lundstrom. 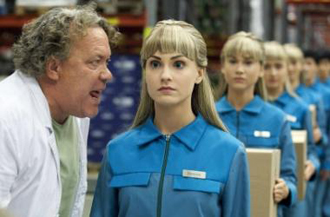 Robot-themed “Real Humans” has aired in more than 50 countries.

In the first episode, it’s clear to see a mixed range of responses from humans. Some see hubots as basic machines, some hate them, while some see them as companions for life. Even the notion of falling in love with a hubot is examined.

Although special effects and robots play a huge part in the series, the director said that it was the interactions between the two kinds that holds viewers captive.

Both men agreed that, in the guise of entertainment, they tackled issues like immigration, homosexuality and the marginalized. “It’s just like our world, with our problems,” Lundstrom. And it’s that human appeal that won over the Swedish public, who are more used to crime series. “It was the first of its kind, and that’s what got people talking,” he explained.

KBS has yet to confirm whether it will air season two, but Lundstrom promises he is not short on ideas “It’s a lot of fun and we want to keep going,” he said.