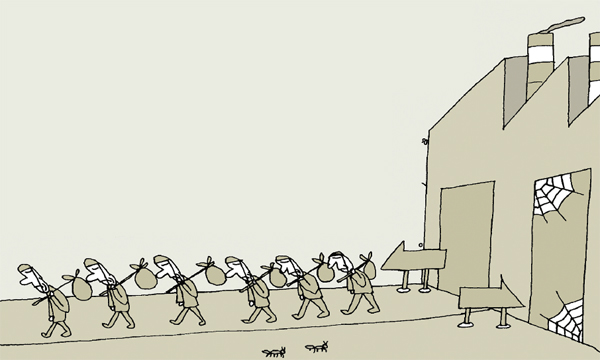 A 44-year-old surnamed Lee is a veteran worker at a factory that manufactures machinery in Changwon, South Gyeongsang. Though Lee has been working at the facility for 25 years, he has never been treated as one of the senior members, taking into account that the average age of production workers at the company is more than 45 years old.

“There are so many workers in their 50s that I am considered below average by age,” Lee said. “There are some new [young] workers joining us, but they are mostly foreigners.”

Concerns are rising as the average age of employees working at manufacturing facilities in Korea is on the rise, which can eventually create a generation gap in handing down techniques and skills.

This isn’t a story of only small and midsize companies operating factories, but also of large companies.

When the labor union of Hyundai Motor launched a partial strike against the management, demanding a wage hike among other requests, the management pointed out that workers already receive a lot of money.

The union, however, countered management’s claim by referring to the average age of workers. The union group argued that “the wage isn’t big considering the average age [46] of workers in technical posts.” The argument shows that production workers at Hyundai Motor in Korea are getting older.

Meanwhile, the average age of production workers at Hyundai Motor’s manufacturing plant in China is only 24 years old.

Workers at industrial sites in Korea are aging and there are concerns that technical know-how will not be handed down to young employees as they are becoming increasingly reluctant to take positions in the blue-collar work force.

Industry insiders note that once production workers in the baby boom generation - those born between 1955 and 1963 - retire, it will be difficult to find experienced workers to carry on the manufacturing process.

The manpower shortage is even graver at small and midsize enterprises.

The average age of production workers during the same period, meanwhile, went from 40.9 years old to 48.3 years old.

Kita data showed the average age of workers in the agriculture, forestry and fishery sector, for example, was 62 years old.

In the service sector, with more middle-aged women taking sales positions, the average age was more than 50 years old, while in the mining and manufacturing sector it was 41.9 years old.

“The percentage of young people at production sites is too small for the baby boom generation that led industrialization to pass on their experiences, skills and work know-how,” said Oh Ho-young, a researcher at the Institute for International Trade. “The coming 10 years will be the last opportunity for Korea’s [aging] workers to pass on their expertise to young people.”

The outlook for a manpower shortage is even grimmer at SMEs in the manufacturing sector.

A Korea Federation of Small and Medium Business survey of 2,101 SMEs released Sunday showed they are short of qualified workers by 9.6 percent. According to the survey, four out of five SMEs responded that because of manpower shortages, they have no choice but to hire foreign workers.

“The government should expand the quota for hiring foreign workers next year to resolve manpower problems at SMEs’ production facilities,” the federation said in a statement.