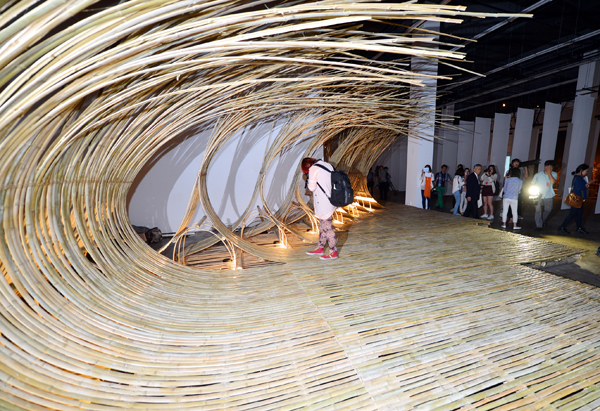 GWANGJU - Chang Yong-hee, a middle-aged Gwangju man who has been driving a taxi for more than 20 years, tilted his head in dismay as he examined the photos. Before him were five sets of hip, stylish taxi driver uniforms, conceptual designs for the future of Gwangju’s taxis.

“They look fancy, but I don’t know if I can fit into them,” said Chang. “Plus they look quite uncomfortable.”

Chang looked down at his potbelly. “Do you think they’ll come in my size?”

The outfits are a part of the 5th Gwangju Design Biennale, which began Friday. The public gets to vote on the uniform they like the best, and the winner could be selected as the official outfits of the city’s official taxi drivers.

The Gwangju Biennale is firmly established now as one of the biggest and most respected art festivals in Asia. But since its debut in 2005, the Design Biennale has also grown into a major art event in its own right.

This year’s Gwangju Design Biennale has the theme “Geosigi, Meosigi,” or “Anything, Something” in English.

In the Korean, “Geosigi” is standard Korean while “Meosigi” is dialect. The expression is used frequently in the Jeolla Provinces when speakers can’t think of the exact word they’re looking for - like “whatchamacallit.”

“I’ve tried to explore cultural habits, shared knowledge and coded contexts that inform the many unspoken ways in which we communicate with one another,” said Lee Young-hye, the artistic director of the Gwangju Design Biennale. “I would like to highlight through this exhibition the idea that design is for the general public and everyday life.”

The 4th Design Biennale in 2011 had the theme of “What is design?” So, in many ways, this year’s biennale is an answer to that question.

From top to bottom: The entrance of the Gwangju Design Biennale. One of five proposals for more stylish taxi driver uniforms. New designs for plastic trash bags for the five districts of Gwangju. Proposals for a new flag to unite North and South Korea at the Gwangju Summer Universiade in 2015. [NEWSIS]

“When I first arrived in Gwangju, I got in a taxi and the driver was wearing nothing but shorts and a typical Korean man’s white tank top,” noted Lee. “That was the impression I have had of Gwangju for a very long time. I wanted to forget about that and tried to erased that first impression but just couldn’t. So when I became the artistic director of the Gwangju Design Biennale, I asked the Gwangju City mayor, if I were to do this exhibit, would he have the taxi drivers wear the uniform? He said he would, so I got right into it.”

Five Korean designers, including Chang Kwang-hyo, Woo Young-mi, Kan Ho-sup, Ko Tae-yong and Choi Ji-hyung, each designed three sets of uniforms - summer wear, spring and autumn wear and winter wear. Visitors to the Design Biennale can cast a vote, and the winning design will be manufactured by the city, according to Lee.

Next to the mannequins displaying the fancy taxi driver uniforms, there is a series of colorful bags, decorated with cute images. They “certainly don’t look like trash bags, but they are,” says Lee.

The garbage bags are another example of practical design. Rather than just have people put their plain, “ugly” trash bags out on the street, Chosun University’s Package Design Center created five bright, beautiful garbage bags, a different design with local characteristics for each of Gwangju’s five districts.

Other practical design projects have tackled the packaging of South Jeolla Province rice bags and store designs for shops that sell rice cakes to make them more modern and upscale, like a good bakery.

In addition to practical designs, this year’s Gwangju Design Biennale has a big focus on industrial design.

“Designers know that design is important,” said Lee. “So I thought it was our job to help the public understand it, too.”

For this year’s edition, 358 artists and design firms from 20 countries participated in the Design Biennale, presenting almost 600 works. In addition to the theme gallery, which focuses on “Geosigi, Meosigi,” there is a general design exhibit, a special exhibit of Gwangju-related design, a project exhibit on practical design and international workshops.

Upon entering the main building of the Design Biennale, the “Geosigi, Meosigi” exhibit is up first. This section was designed by Kim Paik-sun, who was inspired by former Culture Minister Lee O-young’s book “The Natural History of Korean Culture.” The exhibit looks at 64 traditional Korean household objects, such as rope egg holders and clothing, through the lens of the old and new. The texts of Lee’s book are projected on the wall of the gallery, accenting Kim’s designs.

In the next gallery, children become the center of attention, as the Kongdakong Nursery showcases bright colors, toys and other kid-friendly designs. But “this is not just any nursery,” says Lee, the artistic director. This section was designed by Park Ja-il, owner of Ideakids, a design company that specializes in research, development and the distribution of educational content and programs for children. The colorful paintings on the walls were done by painter Shin Su-won.

“I’ve seen and read numerous news reports about child abuse in kindergartens and day care centers in Korea in recent years and such news just breaks my heart,” said Lee. “I believe nurseries should be created to enable a safe, comfortable environment. For this exhibition, we have constructed nurseries that suggest new directions in Korean nursery design and offer practical examples designed to appeal not only to kids but also to families. I can tell you I’ve put a lot of heart and effort into this section.”

In the Design Biennale’s international section, works from Great Britain, Japan, China, Australia, New Zealand and all the members of the Association of Southeast Asian Nations are on display. The entrance to Japan’s “Nangchang Nangchang” section is especially notable, with a bamboo, wave-like walkway made by renowned Japanese architect Kengo Kuma.

Sports fans will be attracted to Gallery 3, as it features the “Designed to Win” section, an exhibition visiting from London’s Design Museum. This exhibition shows the intersection between design and sport, using shoes, helmets, body suits and more to show how design is an integral part of pushing humanity to new limits.

The exhibits in Gallery 4 turn decidedly upscale, thanks to Louis Vuitton’s “Objects Nomades,” a section full of luxury bags, trucks and other travel accessories.

Following that section comes “Design From Tradition,” a look at a new concept in Korean-style of wooden floors, or daecheong maru.

“I really love this space because they [the five designers who participated in this section] had the lowest budget, but this area turned out magnificently,” said Lee. “I couldn’t believe my eyes, how oriental and how Korean it looked.”

Design also can have its controversial side, as seen toward the end of Gallery 4. There, in the “National Flag” section, you can see 90 designs for a new flag that both North and South Korea could compete under at the Gwangju Summer Universaide 2015. The section also calls for the North and South Korean teams to compete together at the games.

The controversy arose Friday morning after 11 designs that included the North Korean flag were taken down, following a request by the Ministry of Trade, Industry and Energy, which asserted the flags “have nothing to do with the event.”

But the move provoked a fierce reaction from the designers, and Gwangju City and the Design Biennale Foundation decided to return the contested flags to the exhibition.

In the final exhibition hall is one of the artistic director’s favorite works, a large chandelier covered in needlepoint images of things considered precious to Gwangju. Prior to the Design Biennale, organizers surveyed local citizens about what they considered most precious about Gwangju. The 20 most frequent answers - which included words such as “May 18” (for the Gwangju Uprising of 1980), “Mount Mudeung” (the mountain that looms over the city) and “watermelon” - were chosen, and regular people asked to embroider images related to them. The completed designs were then collected and put together in a form of a chandelier by Sue Young-hee.


The 5th Gwangju Design Biennale will run through Nov. 3 at the Gwangju Biennale Exhibition Hall in Gwangju, South Jeolla.