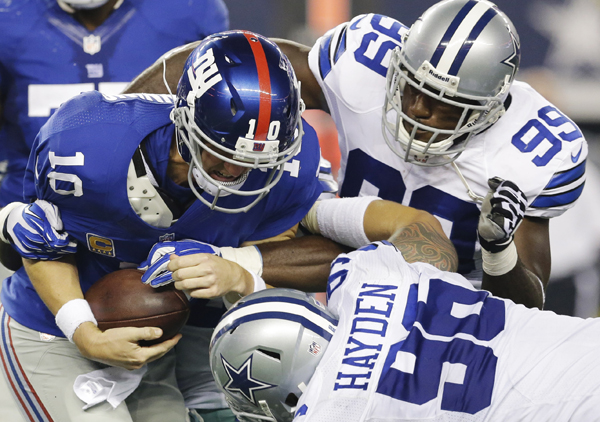 New York Giants’ quarterback Eli Manning (10) is taken down by Dallas Cowboys’ defensive tackle Cullen Jenkins (99) and Nick Hayden (96) in the second half on Sunday in Arlington, Texas. [AP/NEWSIS]

Boldin finished with 208 yards receiving and a 10-yard touchdown, and his sensational San Francisco debut helped keep his team on a roll in what has evolved into a fierce NFC rivalry.

Vernon Davis did his part in a prolific passing game led by Kaepernick, with a pair of TD catches for the NFC champion 49ers.

Frank Gore scored a go-ahead, a 1-yard touchdown with 5:47 remaining as the 49ers made it three straight against Aaron Rodgers and the Packers, after beating Green Bay last September to open the season and then 45-31 in the NFC divisional playoffs.

“We knew they were going to come in ready to play after what happened in the playoffs,” Boldin said. “We had to come out and match their intensity.”

New Orleans held on for a 23-17 win over the Atlanta Falcons in coach Sean Payton’s return from suspension, with Drew Brees passing for 357 yards and two scores.

The Dallas Cowboys beat Eli Manning for the first time in their new $1.2 billion stadium with Brandon Carr returning an interception 49 yards for the clinching touchdown in the 36-31 victory over the Giants.

At Chicago, the Bears rallied for a 24-21 win over the Bengals, with Jay Cutler passing to Brandon Marshall for the go-ahead touchdown in the fourth quarter.

At Detroit, Reggie Bush turned a short pass into a 77-yard touchdown in the third quarter and finished with 191 yards of offense to help the Lions to a 34-24 win over Minnesota.