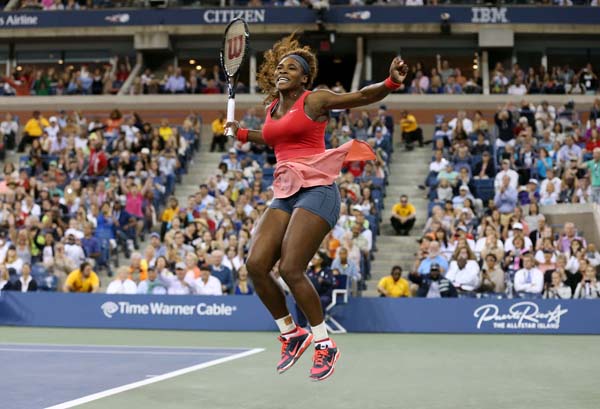 NEW YORK - Fussing with her skirt and flubbing her shots, Serena Williams was troubled in the U.S. Open final by the swirling air and the strong play of Victoria Azarenka.

After one miss, Williams declared, “I can’t play in this wind.’’ After blowing a big lead and dropping the second set, Williams chucked her racket toward the sideline, and it bounced back onto the court.

In the end, Williams pulled herself together, as she usually does when it matters the most. Facing her only test of the past two weeks, the No. 1-seeded Williams overcame No. 2 Azarenka, 7-5, 6-7 (6), 6-1 on Sunday for her fifth championship at Flushing Meadows and second in a row.

Williams, who turns 32 on Sept. 26, raised her Grand Slam singles title count to 17, the sixth-most in history and one shy of Martina Navratilova and Chris Evert. Williams collected a $3.6 million prize, including a $1 million bonus for producing the best results during the North American summer hard-court circuit leading up to the U.S. Open.

“Vika’s such a great opponent, such a great fighter,’’ Williams said, “and that’s why she’s been able to win multiple Grand Slams. That’s why it was never over until match point.’’

Yes, this one did not come easily, even though it appeared to be nearly over when Williams went ahead by two breaks at 4-1 in the second set. Williams served for the match at 5-4 and 6-5 - only to have the gutsy Azarenka break each time.

“In the third set, Serena really found a way to calm down and restart from zero and quickly erase what happened,’’ said Williams’ coach, Patrick Mouratoglou.

This was a rematch of last year’s final, also won by Williams in three sets, and two-time Australian Open champion Azarenka provided another challenge with her big swings off both wings.

“It is a tough loss, but to be in the final and play against the best player - who deserves to win today - it’s incredible,’’ said Azarenka, who is from Belarus. “I gave it all today. We showed our hearts. We fought hard.’’

Four times, Azarenka was only two points from taking the opening set. At one such moment, with Williams serving at deuce after a double-fault, she was called for a foot fault, erasing what would have been a 121 miles per hour ace. AP