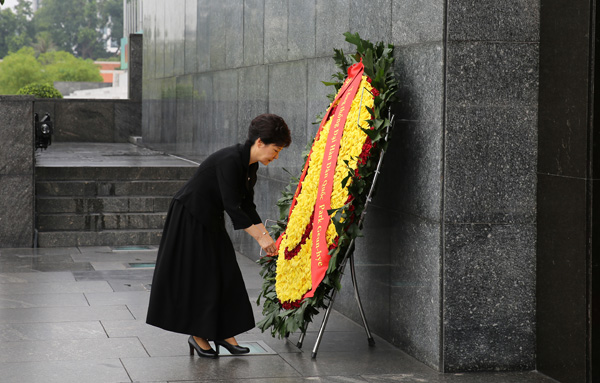 President Park Geun-hye and President Truong Tan Sang of Vietnam agreed on a series of economic initiatives at bilateral talks held in Hanoi yesterday, including increasing trade up to $70 billion and working toward a free trade pact.

On the third day of her five-day official visit to Vietnam, Park and the Vietnamese president met at the presidential palace in Hanoi, issued a joint agreement to sign a “high-level, comprehensive” free trade agreement by 2014 and set a new goal of increasing bilateral trade to $70 billion by 2020.

Praising the rapid development of economic relations between the two countries for more than 20 years, including $20 billion in trade in 2012, Park promised to accept more Vietnamese exports for a “balanced expansion of trade,” according to a joint statement released yesterday.

Both parties also agreed to accelerate negotiations to sign a free trade agreement in 2014 and hold two additional working-level talks within this year, following a second negotiation in May. The third round of talks will be in October.

“As the two countries accomplished the goal of reaching bilateral trade of $20 billion in 2012 .?.?. we also agreed to make efforts together to hit the goal of $70 billion,” Park said at a press meeting in Hanoi after the summit. “President Truong Tan Sang hoped Korean companies will expand their investments in Vietnam, and I will request the assistance of the Vietnamese government to resolve problems Korean companies face in Vietnam and improve the conditions of their investment.”

Park also mentioned that she will help transform the “strategic cooperative partnership” formed between the two countries in 2009 under the Lee Myung-bak administration “into a more stable and preferential one, based on the achievements made over the past 20 years.”

The Vietnamese president urged Korean companies to increase investment in the country and expressed the hope that the unbalanced trade between the two nations will be resolved.

“By setting the goal of trade at $70 billion and accelerating negotiations for the FTA, both countries agreed to resolve the lack of balance in trade,” Sang said. “Vietnam welcomes Korea’s choice of us as an important economic partner and Korean companies’ investment in Vietnam and their sharing of Korean technologies with Vietnam.”

According to Korean government statistics, Vietnam was the sixth-largest market for Korean exports in 2012. Korea’s exports to Vietnam in 2012 were $15.9 billion, up 18.5 percent from the previous year, and imports were $ 5.7 billion, a 12.5 percent increase.

Vietnam is planning to build 10 nuclear power plants by 2030. After finishing an 18-month-long preliminary “inspection,” Korea will make a bid for the job, and Vietnam’s government will decide in 2015. 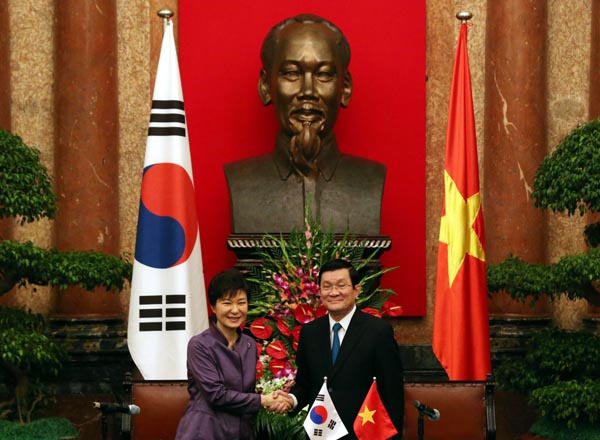 “We, the two leaders, had the same perspectives that sharing Korea’s high-end technologies and experience in nuclear power plants would be also helpful for the nuclear energy industry of Vietnam,” Park said.

“Additionally, we agreed to support Korean companies’ participation in new projects of building infrastructure in the energy industry in Vietnam, such as building coal power plants in southern regions or developing Vietnam’s oil reserves.”

In terms of North Korea’s military provocation and nuclear weapons program, the president of Vietnam promised cooperation to ease tensions on the Korean Peninsula.

“I highly appreciate Korea’s efforts to ease tensions and create sustainable peace on the Korean Peninsula by establishing mutual trust,” President Sang said. “We will strengthen bilateral cooperation on regional and international stages including the UN, Asean, WTO, APEC and ASEM.” Vietnam is the fourth country Park has visited since her inauguration in February. She will return to Korea on Wednesday.

Before the summit, Park paid her respects at the Ho Chi Minh Mausoleum in Hanoi, laying flowers at the tomb of the Communist leader.

Paying silent tribute for about 10 seconds, she made no official comments at the mausoleum.

She didn’t mention that her father, former president Park Chung Hee, sent a total of 325,517 South Korean troops to the Vietnam War to fight on the American side, according to statistics from the Ministry of National Defense.

Two former liberal Korean presidents - Kim Dae-jung and Roh Moo-hyun - made formal apologies for the deployment on visits to Vietnam, prompting criticism from conservatives and war veterans in Korea.

In 1992, when Korea and Vietnam established diplomatic ties, Vietnam agreed not to ask Korea for an apology for fighting on the American side in the war.