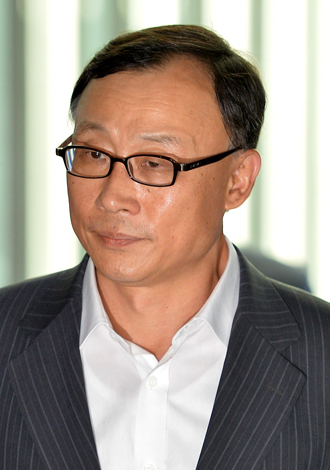 Prosecutor General Chae Dong-wook denied that he had an out-of-wedlock son and demanded a local newspaper retract its report.

Chae said he is willing to take a DNA test to prove the report wrong.

On Friday, the Chosun Ilbo reported that the 54-year-old prosecution chief has a 10-year-old son from an extramarital affair with a woman in July 2002, when he worked as the chief of the narcotics investigation department at the Supreme Prosecutors’ Office.

Yesterday, the Chosun published an additional report that claimed the boy’s school records show that the boy’s father’s name is Chae Dong-wook. It added that the son entered a private elementary school in 2009 and departed for New York to attend a new school on Aug. 31. It said that officials and teachers at the boy’s school confirmed the information.

Following Friday’s report, political analysts speculated that someone in the Blue House or government wanted the prosecutor general replaced because of his handling of the investigation into allegations that the National Intelligence Service meddled in last year’s presidential election.

After denying the Chosun report, Chae said someone was trying to disrupt the prosecution and sensitive ongoing investigations.

“I will take necessary action, starting with the Press Arbitration Commission if the Chosun doesn’t issue a correction,” Chae told reporters yesterday. “The request will be made as early as today. I’m even willing to take a DNA probe.”

His office said a DNA test was only one possible step he may consider taking. “The chief won’t change his words regarding the allegation and will pursue the issue adamantly,” a spokesman of the prosecution told reporters.

Chae appeared at his office around 9 a.m. yesterday as usual and discussed the issue with other officials, including Kil Tae-ki, deputy head of the Supreme Prosecutors’ Office, and Oh Se-in, a researcher at the Institute of Justice, a Ministry of Justice organization providing training programs.

“I saw the name [Chae Dong-wook] when I was preparing documents for the boy’s transfer to the school in New York,” an official at the elementary school was quoted as saying. “I didn’t know whether the name in the school records was the prosecution chief’s or not, but I recently came to know that it is the same person after seeing news reports. I don’t understand how such a fact wasn’t revealed in his confirmation hearing.”

The official added that the boy stated that his father was a scientist.

The Chosun said that former classmates of the boy heard him say, “My dad became the prosecutor general.”

When the news was first reported, Chae told reporters “I’ve never heard of it,” but he didn’t deny the report or threaten legal action.

“There were opinions criticizing the chief’s wishy-washy attitude last week,” sources in the prosecution told the JoongAng Ilbo.

“But since he started showing a stronger stance on the issue, people in the organization are feeling much better now.”