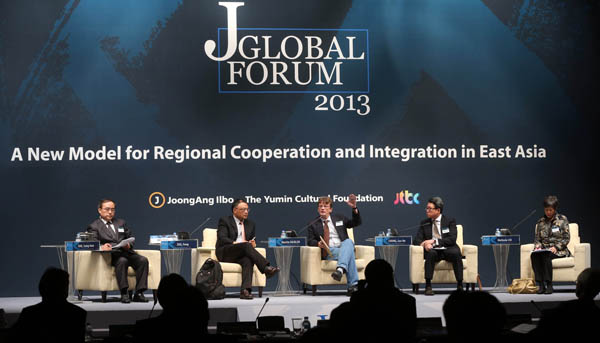 Panelists debate the theme “New Dimensions in U.S.-China Relations: Competition or Cooperation?” yesterday at the second session of the 16th J-Global Forum held at the Westin Chosun Hotel in Seoul. By Kang Jung-hyun

The process of building trust on the Korean Peninsula can contribute to greater unity and cooperation in Asia, which currently is divided by historic and territorial conflicts, Unification Minister Ryoo Kihl-jae said at the J-Global Forum yesterday.

“The reality of Northeast Asia is the tension and mistrust which stands in the way of true cooperation in the region,” said Ryoo at the 16th J-Global Forum, sponsored by the JoongAng Ilbo, JTBC television network and Yumin Cultural Foundation, at the Westin Chosun Hotel in central Seoul. It was attended by nearly 200 journalists, scholars and other experts from nine countries.

“To advance into a new East Asia, we especially cannot turn our heads away from the North Korea issue,” Ryoo said. “Thus, the process of coming up with a fundamental plan to resolve [the North Korea] issue may play a significant role in contributing to easing strife within East Asia and strengthening cooperation in the region.”

Ryoo was referring to President Park Geun-hye’s policy of trust-building between South and North Korea.

“Luckily, there has been steady progress on pending issues between North and South Korea recently,” Ryoo added, such as the reopening of the Kaesong Industrial Complex and the holding of reunions of families separated by the 1950-53 Korean War.

Hong Seok-hyun, chairman of JoongAng Ilbo and JTBC, recommended looking at the example of Europe to overcome historical and territorial disputes for a more cooperative and integrated East Asia.

“In response to the financial crisis in the euro zone, the European Union increasingly sees a stronger centrifugal force, and Germany and France today have become the pivot of the European Union,” Hong said. “I hope we can elicit answers through European precedents from five decades ago that will free three countries - China, Japan and South Korea - of the endless loop of dispute and conflict.”

Wieland Wagner, New Delhi bureau chief of the German weekly magazine Der Spiegel, spoke on how historical and territorial disputes were resolved in France and Germany. “How then did the two arch-enemies manage to overcome hostility? First of all, they settled an important territorial dispute,” said Wagner referring to Germany and France’s agreement in 1955 that France would return the border region of Saarland to Germany.

Tokyo and Seoul both lay claim over the Dokdo islets, called Takeshima by Japan, in the East Sea. Beijing and Tokyo both claim the Senkaku Islands, called Diaoyu by China, in the East China Sea.

The 16th J-Global Forum invited its participants to discuss the theme “A New Model for Regional Cooperation and Integration in East Asia.”

Three sessions discussed precedents in Germany and France to deal with disputes over history and territory, new dimensions in U.S.-China relations, and challenges and opportunities for an East Asian community.

Yoshibumi Wakamiya, former editor-in-chief of Japan’s Asahi Shimbun, said that there was a paradox in Japan where, “After the sentencing of war criminals who received the death sentence, there were a lot of Japanese war criminal politicians who were able to return to politics and make a comeback.”

Park Cheol-hee, a Seoul National University professor, said there was unanimous understanding in Europe over who should take responsibility for World War II whereas in East Asia, “it was not clear who was responsible, and the Japanese emperor was not pointed to as the cause of war.”

Park proposed two ways to resolve the historical and territorial disputes: a minimalist approach, based on nonaction, respecting the status quo while avoiding unnecessary provocations or words, or a maximalist approach including joint historical reconciliation, building transnational civil networks and the educating of politicians.

“A joint historical research commission should be launched with the strong intervention of each government,” said Park. “Civil initiatives for constructing shared historical memories would be much more effective because they would be relatively free of a government agenda or purpose.”

Zhu Feng, an international studies professor at Peking University and deputy director of its Center for International and Strategic Studies, said the United States’ Asia pivot is aimed at China, as is its alliance with Tokyo.

“Given U.S. military supremacy and regional preponderance, Beijing has little feasible choice to challenge it in the foreseeable future,” he said. He also called President Xi Jinping a “more pragmatic and decisive” leader than his predecessors who will be driven by domestic issues but will also “be more personally engaged in China’s foreign policy than earlier leaders.”

The forum has been held since 1996, at first every two years and then annually. Until 2007 it was called the Asia Press Forum.