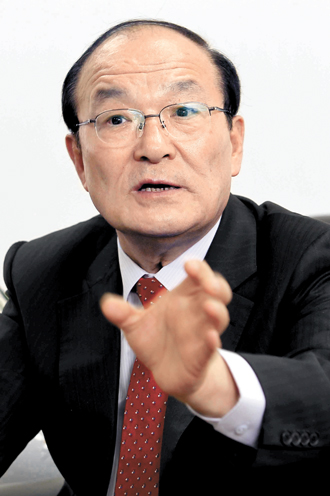 The 66-year-old, who more than four decades ago worked to introduce the national health insurance system in 1976 as a young public servant, has led the state-run insurer for two years.

But in an Aug. 28 interview with the JoongAng Ilbo, Kim gave a grim assessment of the fiscal health of the universal health system in the future.

“If the current system remains unchanged,” he said, “a fiscal crisis will hit the health insurance service by 2015.”

Kim’s remarks were somewhat surprising since the state-run health insurance system recorded a surplus two years in a row in 2011 and 2012.

For the first half of this year, the national insurance body managed a surplus of 398.8 billion won ($366.4 million).

But Kim said although the number of people who went to see doctors decreased last year, the number will rise starting from the second half of next year given the aging of Korean society.

To avoid the crisis, the Seoul National University graduate called firstly for a reform in the current insurance scheme that collects insurance contributions from individuals based on their assets, including cars and property.

He also hinted during the interview that the NHIS is considering filing a lawsuit against tobacco and alcohol companies for their products’ detrimental effects on people’s health, which leads to rising medical costs and ends up costing the insurance corporation 6.8 trillion won annually.

“For their damaging role in the fiscal conditions of the NHIS, we have no choice but to come up with ways to cover our losses [caused by smoking and drinking],” said Kim. He said governments in developed nations “include taxes on alcoholic beverage for the state-run insurance coverage.”

“In regard to the issue of alcoholic beverages, we are now studying ways to collect finances from customers and industry players.

Filing a lawsuit against such companies is one of the measures now being considered.”