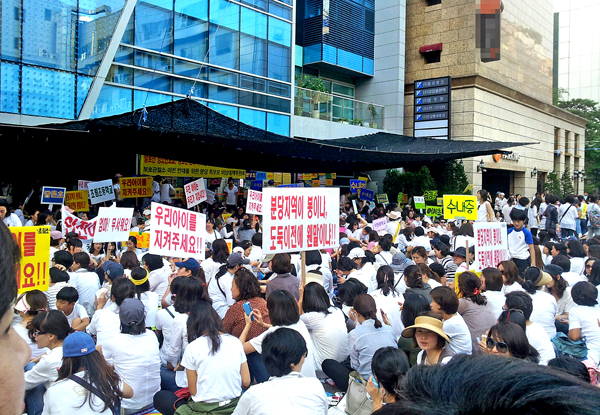 Thousands of residents of Bundang District in the city of Seongnam gathered in front of the Seongnam probation office in Seohyeon-dong and blocked the entrance yesterday so workers could not enter. [NEWSIS]

Early yesterday morning, about 2,100 residents of Bundang District, the wealthiest region that has many upscale apartment complexes and AK Plaza, the largest shopping mall in the city of Seongnam, gathered in front of a building in Seohyeon-dong and blocked the entrance so workers could not enter.

They were protesting the Seongnam probation office, where former convicts check in with their parole officers.

The residents carried placards that read, “We only care for our children’s safety!” and “A probation center in a region with a 40,000 population? Are you out of your minds?”

“That probation center sneaked in without residents’ consent,” said Choi Mi-yeong, a 43-year-old resident. “Placing a facility that manage ex-convicts on the main street of the district where tens of thousands of people including students pass by every day isn’t acceptable.”

The Seongnam probation office moved into a 1,122 square-meter (12,077 square-foot) building in Seohyeon-dong last Wednesday morning from Sujeong District, where its lease expires at the end of September. The center, which is managed by the Ministry of Justice, has been a wanderer for the last 13 years. It first opened in 2002 in Sujin 2-dong. In May 2005 it tried to move to Gumi-dong, but residents complained and it had to give up the plan a few years later. It has been in three different locations in Sujin-dong.

Late last week, residents of Seohyeon-dong realized the probation center was now in their neighborhood and they staged their first rally on Sunday. Seongnam Mayor Lee Jae-myung posted a message on Twitter that read, “The city government wasn’t informed about the plan. I support what our residents say, and I will try to find a way that for the Seohyeon office can operate in another place temporarily.”

The Ministry of Justice says the residents are overreacting.

There are 58 probation centers in the country, according to the ministry.

“We didn’t have to discuss the move with the local government because the law allows probation centers to be placed in a commercial area,” Mun Mu-il, director of the Crime Prevention Policy Bureau of the ministry told the JoongAng Ilbo.

“Though the law allows such a move, putting facilities like this in a residential or commercial area usually creates a backlash from residents,” Public Administration Professor Lee Chang-won from Hansung University told the JoongAng Ilbo. “The ministry, the city government and representatives of the local residents need to establish a consultative body to solve the problem.”