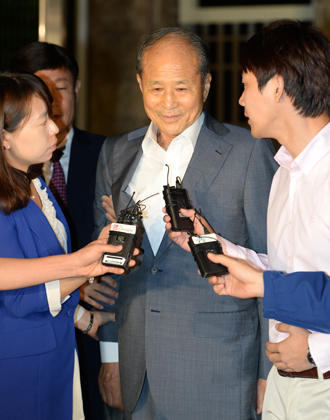 Lee Sang-deuk, elder brother of former President Lee Myung-bak and a former six-term lawmaker, meets a throng of reporters as he walks out of prison early yesterday morning in Uiwang, Gyeonggi. Once nicknamed “Regent King” for wielding considerable power during the Lee administration, Lee was indicted in July 2012 and jailed for taking hundreds of millions of won in bribes from a local company and failing savings banks and was sentenced to two years in prison in January. His prison term was commuted to 14 months by an appellate court in July. Lee completed his 14-month prison term and will receive medical treatment for pneumonia while awaiting a ruling by the Supreme Court on the bribery charges. [NEWSIS]