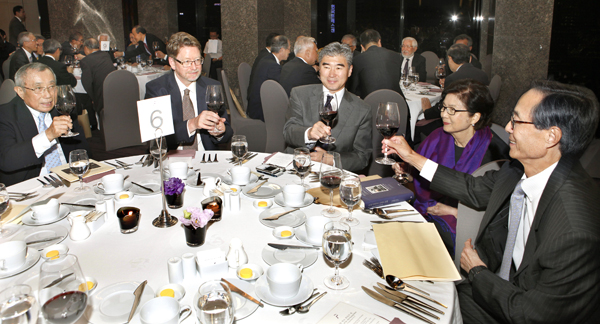 Some 150 scholars, former and current government officials and foreign relations experts gathered in central Seoul Tuesday for the launch of a book on the late Dr. Kim Kyung-won, a renowned Korean diplomat.

“[Kim Kyung-won] was a man who witnessed in his lifetime the sorrow of national division and the satisfaction of South Korea’s economic miracle - the achievement of rapid industrialization, democratization and globalization,” said Han Seung-joo, former foreign minister and chairman of the International Policy Studies Institute. “In the process, Dr. Kim left a great footprint for the development and growth of our nation and society as a professor, diplomat, government official and intellectual over the past forty-some years.”

Kim was born 1936 in South Pyeongan Province in North Korea and fled to the South with his brother on a fishing boat during an early part of the 1950-53 Korean War.

Ambassador Kim said that Kim Kyung-won’s contributions to U.S. and Korean diplomacy was “especially significant in light of this year celebrating 60 years of the U.S-South Korea alliance,” and he was an inspiration to many diplomats, including himself.

Lee, a special advisor to the JoongAng Ilbo, pointed out that Kim served under the authoritarian regimes of Park Chung Hee and Chun Doo Hwan and led Korea’s diplomacy at the United Nations and in Washington during the tense, unstable period of the last stages of the cold war. “I believe the authoritarian regimes he served were lucky to have such a world-class mind with good judgment and strong convictions to help in the aggressive campaign to pull the country out of poverty, modernize it, and turn it into an industrial power to compete in the world amidst persistent security threats from North Korea.”

The memorial volume “Agonies and Aspirations of a Liberal” is a collection of Kim’s essays and columns in both English and Korean, published by JoongAng Books.

“Kim Kyung-won played a very, very special role in creating Korea’s role in Asia-Pacific community, that stretched to Canada, to the United States and Asia,” said Professor Paul Evans, director of the Institute of Asian Research at the University of British Columbia, who dubbed Kim a “liberal realist.”

“The importance of Kim Kyung-won’s life, the difficulties that he faced, the hard political decisions, the judgments in very difficult times, that’s a story that should be known to the next generation,” Evans said. “Young Koreans that are studying international relations, as Dr. Kim did, know very little about their own diplomatic history, and most importantly, they know little about the individuals who were at the center of some very turbulent, some very important decisions.”