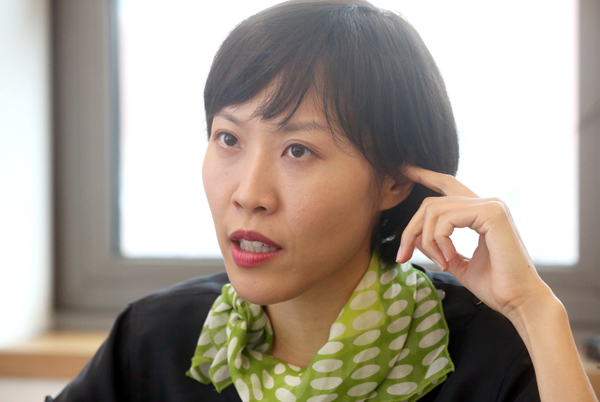 Gina Kim says she has at least five more stories that she’d like to make into films. By Choi Jeong-dong

A Korean woman who hasn’t been a film director that long has rejoined the faculty of Harvard University to teach about what she knows about film production.

Gina Kim - who is known for “Never Forever,” released in 2007, and “Final Recipe,” currently in production - is teaching a class on film production in the Department of Visual and Environmental Studies at Harvard University for a year.

The director, 39, came into the international spotlight in the early 2000s as her feature-length films “Gina Kim’s Video Diary” (2002) and “Invisible Light” (2003) garnered impressive critical acclaim and were shown at prestigious film festivals, including the Berlin International Film Festival.

That led Harvard to notice the director. In 2004, she became the first Asian film director to teach at the school. As a full-time lecturer at Harvard University’s Department of Visual and Environmental Studies, she taught between 2004 and 2007. So she isn’t an entirely new face at the school.

Kim was ambitious about this academic year.

“I’ll be teaching both theories and practical exercises about film production,” she told the JoongAng Sunday. “I might also take up a master class, which teaches advanced film production process. I’m also thinking of holding a seminar that touches on everything about film drama that includes music and costumes.”

The Department of Visual and Environmental Studies at Harvard has been inviting film directors who are active in the field to give lectures at the school at least once a year, so that students are not just confined in ivory towers and can learn about the latest trends from active professionals. To give variety, they hire such people on one-year contracts. Lecturers have included Spike Lee, the award-winning American film director known for “Malcolm X” (1992).

Still, it was a surprise when Harvard invited Kim, a female director who has just stepped into the film industry. So what did Harvard see in her?

“As ‘Gina Kim’s Video Diary,’ which was performance video art, and ‘Invisible Light’ which was an experimental play, received spotlight at international film festivals, books about them came out and some dissertations also mentioned them,” Kim said. “Torino Film Festival also held a special showing of them. I heard that a faculty member at Harvard University saw that by accident and sent me an invitation.”

While most film directors return to their job after a year of teaching, Kim worked as a full-time lecturer for three years straight. She said she had a reason.

“Harvard at that time was different from what it is today. It was like a closed society. Korea was barely known. Although it was years after the film ‘Oldboy’ made international headlines, people still had no concept of Korean film whatsoever. That prompted me to organize a Korean film festival. I heard it was the first such attempt at an Ivy League school.”

At the festival, she showed 15 representative Korean films from the 1960s to the present. The reception was better than she expected. She got calls from museums in Boston and New York, which wanted to hold a similar event. She said she got a letter from the dean that thanked her for the event that facilitated cultural exchanges and requested her to continue teaching.

And since about two to three years ago, she said she got requests from the school to return. Although she had been hesitant due to the film production she is working on, she finally decided to go back and teach, at least for the 2013 academic year.

From left: Gina Kim on the set of her 2007 film “Never Forever.” A still shot of the film that stars Vera Farmiga and Ha Jung-woo. [JoongAng Ilbo], provided by Prime Entertainment

In love with video art

When asked if she wanted to be a filmmaker as a young girl, she said she never really thought of what she wanted to “become,” but only what she wanted to “do” or “make.” When Kim was a senior, a visual arts media class was offered for the first time at SNU. She said that’s when she learned how interesting video art is.

“I could understand why feminist artists in the U.S. were passionate about it when video art first emerged in the 1960s,” said Kim. “I was also attracted because it was a largely unexplored territory in Korea at that time, although it is now a generalized field. It was pretty revolutionary, I thought then, and that I should do it.”

She wanted to study at the graduate school of the California Institute of the Arts, which is known for its courses in film production. And she decided to be bold. She flew to Los Angeles and met with a professor at the school. She showed some of her work and said that she wished to study at CalArts. Her boldness worked. She was admitted not long after.

To Kim, video art opened a door to the world.

“I felt that it was a world that wasn’t defined yet, that had no language yet. Although it was dominated by male artists, it wasn’t masculinized yet,” she said. “Also, video art is all about instant feedback. You can also create while watching. It is a little bit narcissistic in that sense, totally different from other media that I’ve worked with.”

She said that the reason people give their best when drawing in a small room or writing a poem alone is because of the potential audience, an expectation toward unknown mass that the artist has never known or met. And video art is all about communicating and sharing with the audience.

The most democratic tool

Since she was young, Kim had been deeply interested in social issues, mostly due to her father, who studied social studies for a long time.

Although she pursued a bachelor degree in fine arts, her passion for social revolution stayed in her heart. She constantly struggled with what she thought were the limits of paintings, in particular in terms of communication with the public.

Her encounter with video art, in that sense, was destiny. She said she thought “no other medium is as democratic as video art.”

In fact, her early works appear to have clear messages. When asked whether which is more important to her when making films, “messages” or “popular appeal,” she said that “such a category in itself is an oppression.”

“I am a liberalist to the bone,” the director said with a laugh. “I think, in particular, Korea likes to categorize things by one standard. However, I don’t want to live like that. There are so many different sides and facets to consider.”

Kim did have her own definition of what a movie is. She quoted one of her professors at her graduate school, who said that “cinema translates time into space.”

“How to translate the memories of time into space, how to play something that we see into a story - isn’t that what film is about?” said Kim.

The latest story she told the audience was about a dangerous affair between a married woman and an immigrant worker in her 2007 film “Never Forever.” After reading Kim’s script, renowned Korean film director Lee Chang-dong and Lee Joon-dong, the CEO of Now Films, wanted to produce it. Other Hollywood producers joined the crew.

The film, a collaboration between Korean and American producers, stars Vera Farmiga, who is known for her role in the 2006 film “The Departed,” and Ha Jung-woo, who was a new face back then but is now a Korean heartthrob. It premiered at the 2007 Sundance Film Festival and was awarded the Jury Prize at the 2007 Deauville American Film Festival.

On the film, Variety wrote, “Kim’s highly sensitive camera turns the film into a chamber-piece of hushed eroticism and surprising narrative grip.” Martin Scorsese has also described the film as “a moving experience [in which] the performances are wonderful and touching, and the style ... intense and very precise.”

Kim says that she first saw Ha in “The Unforgiven” at the Busan International Film Festival in 2005. She said she, and many other directors, took note of him, saying that he is more than a pretty face and has the presence of a Korean movie star in the ’60s and ’70s.

After the critical success of “Never Forever,” Kim began to expand her influence. She was the first Korean female director to become a jury member for the 66th Venice Film Festival, and she became a member of the jury of the Asian Pacific Screen Awards in 2009.

Kim said Yeoh “is the pro of the pros.” While shooting in Thailand in the sizzling weather of more than 35 degrees Celsius (95 degrees Fahrenheit), there were more than 50 fire pots on the set but the actress never made an outtake.

Kim said that Yeoh also took time to show up at the set even though she was not shooting, saying that she wants to absorb the “vibe” of the set so that she can better immerse herself in her character and the story. While staying in the U.S. for a year to teach at Harvard, Kim plans to hold a large-scale exhibition on Seoul, her second project to let the world know about Korea. In addition, she also hopes to organize an exhibition on actresses.

“In today’s film industry, it is harder for actresses than it is for actors to have a ‘strong persona.’ But after working with some charismatic actresses like Vera Farmiga and Michelle Yeoh, I got to re-think about that.”

When asked about film directors, she said that it is the director’s role to “melt everything that he or she has into the film and help people feel every bit of it.”

“I have about five stories I want to tell before I die,” said Kim. “I wish to make them all into films.”