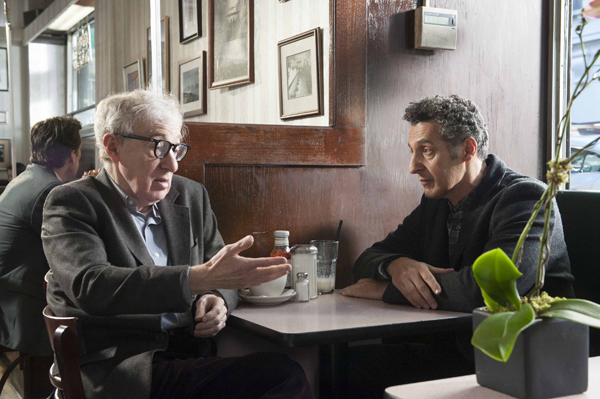 Woody Allen, left, and John Turturro in “Fading Gigolo,” a film being showcased at the Toronto International Film Festival. [AP/NEWSIS]

TORONTO - Not since the forgettable 2000 comedy “Picking Up the Pieces” has Woody Allen starred in a film he didn’t direct. But John Turturro managed to coax Allen back into acting for “Fading Gigolo” with an enticing role: an elderly but novice pimp.

And it wouldn’t have occurred if Allen and Turturro didn’t happen to share a barber. Though Allen and Turturro knew each other somewhat (Turturro had a small part in Allen’s “Hannah and Her Sisters” and was nearly cast in two other Allen films), they weren’t close.

“I knew he liked my work,” Turturro said in a recent interview. “But I don’t sit next to him at [Knicks] games.”

Though both are Brooklyn-born New Yorkers who frequent Madison Square Garden, another city institution brought them together. Turturro mentioned a film idea one day while getting a trim at the salon. The barber liked the idea and later told it to Allen, who went for it.

“It was one of those old-fashioned barbershop things,” Turturro says.

“Fading Gigolo” premiered over the weekend at the Toronto International Film Festival. In the film, Turturro plays a New York florist who begins making money on the side (with the help of Allen’s character) by rendering his services to women. “Fading Gigolo” is seeking distribution in Toronto, with a release most likely sometime next year.

To follow this year’s “Blue Jasmine,” the 76-year-old Allen has been working on his next film in France and didn’t attend the Toronto premiere. He has acted in several of his own films in recent years, including 2012’s “To Rome With Love” and 2006’s “Scoop.”

But Allen has often said that his movie-starring days were through once he couldn’t play a plausible romantic lead opposite an attractive actress.

“He’s a wonderful actor,” says Turturro. “You don’t really know that until you’re opposite of him. He’s really good physically, and he knows how to keep the rhythm.”

Turturro is best known as one of the finest character actors in movies, but he’s sprinkled in a handful of memorable directing efforts over the years, including the 2010 documentary on the music of Naples, “Passione,” and 2005’s comic working-class musical “Romance and Cigarettes.”

After talking over the film with Allen, the two agreed that Turturro would write it and that Allen would give his feedback.

“He’s merciless in his feedback, but it’s very helpful,” Turturro says, adding that some of the script’s broader moments were stripped out. “He wanted it to be a smart film.”

Allen urged Turturro to read some Isaac Bashevis Singer stories, and in the middle of the process, he also asked Turturro to direct three one-act plays on Broadway with him, Ethan Coen and Elaine May.

Still, directing a filmmaker like Allen was intimidating for Turturro.

“It’s a big thing to direct someone like him,” he says. “I was a little bit nervous about it. But he was if not the easiest, one of the two easiest people to work with on the whole movie.

“Woody’s been able to hold the screen for a long time,” he adds. “And he still can.” AP