Changes lie ahead for savings banks

Changes lie ahead for savings banks 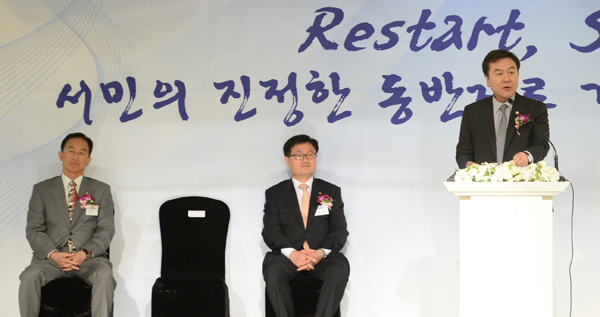 The government will lay the institutional groundwork for savings banks to offer more financial services to consumers than simply loan products, according to Shin Je-yoon, chairman of the Financial Services Commission.

“We plan to offer as much policy support as we can to have savings banks create a desirable financial network with small and midsize enterprises within regions and with consumers in the low-income bracket,” Shin said yesterday. “We will lay a foundation system-wise to allow savings banks to be involved in various other financial services like installment finance services as well as fund, insurance and card sales services.”

Shin’s comments were made at an event yesterday celebrating the 40th anniversary of the Korea Federation of Savings Banks at the AW Convention Center in Buam-dong, northern Seoul. Choi Kyu-yun, chief of the federation, also attended. Shin added that the government will ease regulations related to savings banks to allow them to set up new branches more easily.

Savings banks in Korea were established one after the other in early 1970s - at a time when it was relatively difficult for low-income people to receive bank services. Over a period of time, savings banks offered loans to SMEs and people had depended on private loans.

“Because savings banks back then offered higher interest rates than commercial banks [on deposits], consumers were able to accumulate seed money for the future,” Shin said.

However, in recent years, major savings banks were found to have been involved in corruption scandals and poor management, and the government made various efforts to restructure the industry and resolve insolvency issues. According to Shin, over the past two years of restructuring, 27 savings banks have closed down or merged with commercial banks because of insolvency, which eventually eased market concerns.

In the latter half of the Lee Myung-bak administration, there were a string of corruption scandals involving troubled savings banks that caused concern among consumers.

“The reason why the government is interested in developing savings banks is not because of the industry itself, but because we believe the role of savings banks will increase in the time to come to supply financial services to SMEs and ordinary consumers,” Shin said.

According to the chairman, since 2000, large financial institutions, including commercial banks, have focused their businesses mainly on increasing profits and maintaining stability. Due to such a trend, loans available to consumers with poor credit and SMEs have contracted over time.

“We have also seen some side effects where high-interest lenders [including loan sharks] have seen their business prosper,” he said.

Meanwhile, over the past several months, the FSC under the Park Geun-hye administration had brainstormed with industry experts and related institutions about the future of savings banks.

“We plan to announce what we have come up with this month,” Shin said.