Traditional markets get digital signs of the times

Traditional markets get digital signs of the times 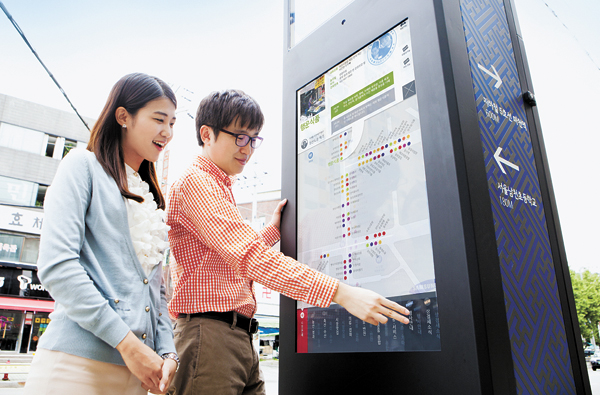 Consumers take a look at a digital signage screen set up by Samsung SDS in front of Macheon Central Market in Songpa District, southeastern Seoul. Provided by the company

Samsung SDS, an IT service company under the country’s largest conglomerate, has rolled up its sleeves to re-energize traditional markets that have been aching to catch up with their bigger chain rivals.

On Monday, the company said it will install 60 digital signage machines at 30 traditional markets across the country by 2015 to help boost their competitiveness and create a friendlier environment for shoppers.

“For example, the display would have a map of the market and if a consumer touches the fruits and vegetables category on the screen, it will give information about related stores,” said a company official. “Once the consumer clicks on the store, he or she will be given information about where it is located, items it sells, the phone number and whether or not it accepts card payment or [the government’s] onnuri gift certificates.”

Ahead of the Chuseok holiday next week, Samsung SDS said it has already installed two digital signage screens at Macheon Central Market and one at Pungnap Market, both in Songpa District, southeastern Seoul.

In addition to installing signage screens at traditional markets, Samsung SDS will also offer merchants training on ways to use smartphones and the Internet, and marketing strategies they can adopt utilizing social network services. The training sessions will mainly target middle-aged store owners who are relatively less accustomed to information technology devices and digital goods.

“There was a sense of desperateness among merchants over the need to learn IT skills to boost competitiveness of traditional markets,” said Yoo Jae-hoon, head of merchants at Macheon Central Market. “We expect more people to visit our market, which will help increase sales.”