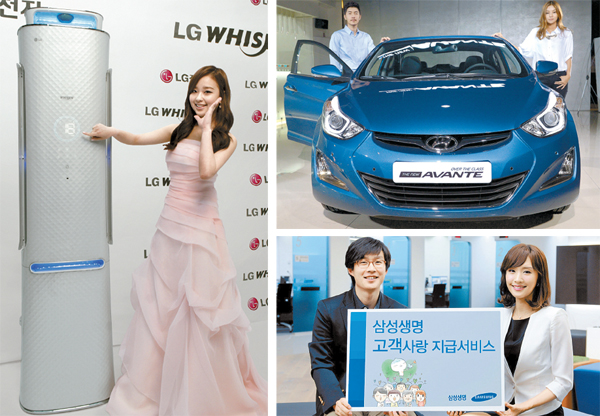 LG Whisen, Avante and Samsung Life Insurance ranked No. 1 in their respective industries.

The 2013 National Brand Competitiveness Index (NBCI) showed that the economic downturn had a negative impact on the power of brands. Now ten years of age, NBCI’s survey is jointly conducted by the Korea Productivity Center (KPC) and the JoongAng Ilbo to measure the competitiveness of domestic brands on a scale of one to 100.

This year’s NBCI of some 197 companies saw an average of 67.5 points, a slight decline of 0.3 points from last year’s 67.8. Out of the 56 industries it surveyed, only 15 saw an improvement in their scores.

A comparison of the average NBCI of product categories in the manufacturing sector revealed that tablet PCs, air-conditioners, apartment buildings, midsize sedans and kimchi refrigerators all had high brand competitiveness. In the service sector, department stores, multiplex theaters, TV home shopping malls and home-study materials were evaluated as the most competitive industry categories.

Among the 197 brands surveyed, Hyundai Motor’s Grandeur, Nongshim’s Shin Ramyun and SPC group’s Paris Baguette were chosen as the top three brands with scores of 76. Paris Baguette joined the index only last year but has shown an outstanding performance, ranking top three among the total brands and No.1 in the baked goods category. 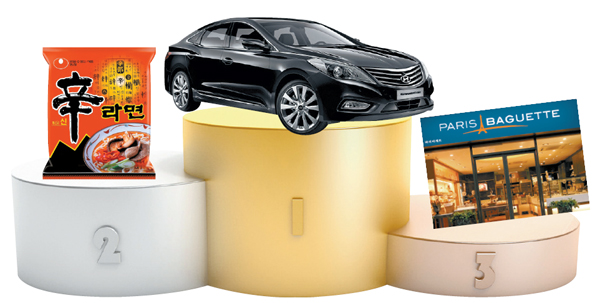 In the service industry, companies with a big gap between the No.1 and No.2 brands contrasted heavily with those with a small gap. No. 1 brands with a huge gap in the IPTV, high-speed Internet, life insurance, bakeries and rental cars industries showed off much stronger brand and company competitiveness compared to their opponents. Due to a tendency for the strongest brands to fare better, the gap between top brands and lesser brands keeps widening.

This is due not only to the heightened marketing activities of leading brands but also consumers’ tendencies to choose reliable products with high brand recognition to minimize the possibility of making wrong choices.

Second, it is notable that leading positions can be threatened with fierce competition. For example, within kimchi refrigerators, the long-leading brand Dimchae was pushed to second place by Samsung Zipel Asak. Within the beer industry, Cass replaced Hite as a leading brand. The service sector also saw similar changes.

CU and Yes24 rose to the top position within convenience stores and internet bookstores, respectively. Although most consumers tend to make safe choices with leading brands, consumers can be more fickle when it comes to industries containing ferocious competition.

In the survey, industry sectors with the highest NBCI ranking were tablet PCs, department stores and air-conditioners. Tablet PCs were included in the survey only last year but have maintained the top rank for two years in a row. Meanwhile, the three industries with the lowest brand competitiveness were water purifiers, bidets and tobacco, as customer demand for those products decreased significantly. Some branded products that experienced a rapid rise in NBCI were credit cards, women’s cosmetics and life insurance, while upper-midsize sedans, tobacco and water purifiers saw the biggest drop.

An official from the KPC forecasted that three keywords will be popular in the manufacturing sector in 2014: small-sized, environment-friendly, and leisure. Reduced purchasing power, strengthened environmental regulations and increased leisure time will influence the purchasing patterns of consumers. In the services sector, integrated brands and easily accessible brands will be trendy. 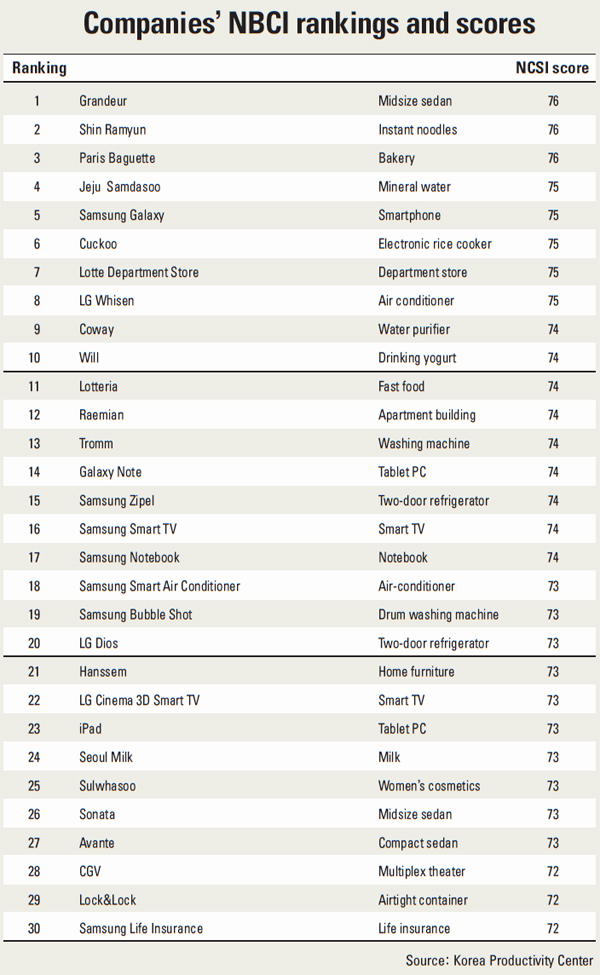 NBCI assesses the correlation between brand loyalty - whether or not the consumers will choose the product again and purchase a similar product in the same product line - and marketing activity.

The NBCI figures are used to evaluate the market value of the brand from the consumer’s point of view.

But more importantly, the NBCI model offers an important guideline on how to improve the competitiveness of domestic brands through objective evaluation and analysis.

For the findings, Korea Productivity Center surveyed some 56 industries, 197 brand users and a total of 101,220 samples, 27,580 user samples and 73,640 nonuser samples, for the previous year to derive the NBCI scores. The survey sample models were collected from Korea’s five major metropolitan cities - Seoul, Busan, Daegu, Daejeon and Gwangju - and the users and nonusers of the surveyed industry were divided into different groups.

The main focus or conclusion of the survey was to find the strengths and weaknesses of each brand by each industrial sector. The NBCI survey was conducted among consumers that have actually used the products and consumers that have not yet experienced the products. However, for apartment buildings, discount chain stores, department stores and general hospitals the survey was conducted in all regions not limited to the aforementioned five cities.