U.S. wary of talks with the North

U.S. wary of talks with the North 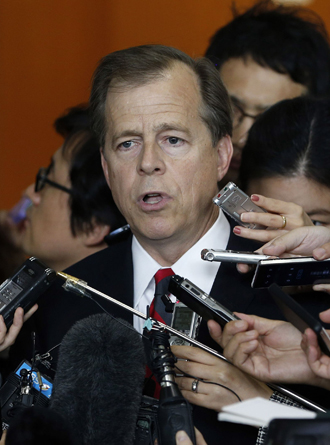 The United States does not believe it is yet time for a resumption of official six-party talks on North Korean denuclearization, according to Glyn Davies, the U.S. special envoy for North Korea. Speaking to reporters yesterday in Seoul, he added that unofficial talks might be somewhat useful.

Davies, Washington’s representative at the talks, said the key obstacle to their resumption remains “very much that North Korea continues to assert its nuclear weapons status.” The talks, involving China, Japan, Russia, the United States and the two Koreas, have been stalled since 2008.

He added, however, that “the quality of the consultations and discussions among the five parties [other than North Korea] has never been better. Our level of agreement is solid and strong.”

Davies arrived in Seoul Monday on the first stop of a six-day regional swing. He met with foreign affairs and unification ministry officials yesterday to discuss policy toward Pyongyang amid indications that the reclusive nation is signaling a willingness to sit down for more talks.

After Davies met yesterday with his South Korean counterpart, Cho Tae-young, the special representative for Korean Peninsula Peace and Security Affairs, the two men briefed the press at the Ministry of Foreign Affairs. They said both countries are open to resuming talks if Pyongyang shows an interest in peaceful denuclearization.

“Right now, we simply do not see a positive attitude by North Korea toward fulfilling its obligations and commitments or to living up to United Nations Security Council resolutions, and we need to see that,” said Davies. “You will recall that not too many months ago, they declared the six-party process dead.”

After months of provocative language and threats from Pyongyang following a Feb. 12 nuclear test, North Korea has recently shown a more cooperative attitude in negotiations on inter-Korea issues such as the reopening of the Kaesong Industrial Complex and the resumption of family reunions. China, after a visit by its negotiator on North Korean affairs, Wu Dawei, to Pyongyang last month, also says it thinks North Korea is willing to return to the negotiating table.

Davies added, “We remain open, of course, to dialogue with North Korea. As a diplomat, I would very much like to get back to that.”

He also said he welcomed unofficial meetings to help discussion among the six-party countries.

China proposed last month that something of the kind be held at an informal meeting of senior officials and experts of the six-party nations scheduled on Sept. 18 and organized by the China Institute of International Studies in Beijing. That date is the eighth anniversary of the Sept. 19 Joint Statement, signed in 2005, in which the five governments facing North Korea at the six-way talks agreed to provide security and energy assistance to Pyongyang in exchange for the latter abandoning its nuclear programs.

Davies said, “We commend the Chinese for holding this kind of discussion.”