To Sept. 22: This is a retrospective of Alphonse Mucha, the Czech artist and designer remembered as an iconic figure of the Art Nouveau movement, which influenced much of the decorative arts from the mid-1880s to 1910, including painting, jewelry, glassware, pottery, textiles, graphic work and architecture.

The exhibition is divided into six parts. ?

To Sept. 25: This is a retrospective of Kim Tschang-yeul, 84, one of the most renowned Korean artists of his generation, to celebrate the 50th year of his career and the planned establishment of a museum for him on Jeju Island in 2015.

The exhibition features about 40 of Kim’s water drop paintings, ranging from those made in the 1970s to his latest works. His water drop paintings, which he painted and developed for more than four decades, are among Korean art collectors’ favorites. Kim donated 200 paintings to the Jeju Provincial Government for the museum.

HOW TO MAKE A BOOK WITH STEIDL

To Oct. 8: The exhibition shows not only the famous art books by German publisher Gerhard Steidl, but also visualizes his work process with artists and writers through documentary photos, designs and illustrations for the books.

Steidl has worked with Gunter Grass, Karl Lagerfeld and many others to create a book - or an artwork, according to Steidl. 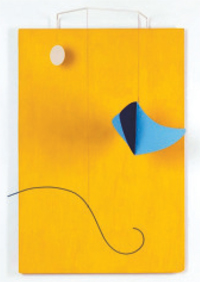 To Oct. 20: This is the “largest-ever retrospective of Alexander Calder (1898-1976) in Korea,” according to the museum. The 118 pieces in the exhibit include not only the artist’s “mobiles,” or sculptures hanging and moving with the air in his signature style, but also his wire sculptures and abstract paintings made in his early years.

The wire sculptures of animals and circus acrobats in dynamic poses, which were called “3-D drawings” by Parisian artists and brought fame to the young Calder, are particularly impressive. Viewers can see how the idea of a“3-D drawing in space that changes at every moment” finally developed into mobiles such as “Scarlet Digitals” and “Le 31 Janvier” on display.

THE SLEEP OF REASON

To Dec. 7: This is the first solo show in Korea of the British artist duo Jake and Dinos Chapman, often known as the Chapman Brothers. They are famous for challenging the sanctity of other artists’ works and the innocence of children, not to mention issues like violence, death and sex.

The title of the exhibition is named after Francisco Goya (1746-1828), showing the artist team’s inspiration from the Spanish master. It is also see in their “The Same Thing But Silver”(2007) among the exhibits. The silver sculpture depicting three dismembered corpses hanging from a tree is based on one of Goya’s etchings in the series “The Disasters of War.”

The exhibits also includes “One Day You Will No Longer Be Loved”(2013), a group of anonymous portraits from the 19th century made by unknown artists but transformed into grotesque figures as the Chapman Brothers painted over their faces.

Admission is free. The gallery is open from 11 a.m. to 7 p.m. Monday to Saturday. It is closed on Sunday.