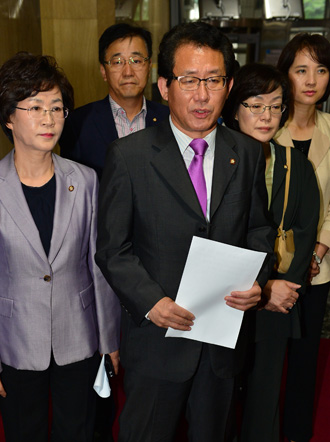 DP lawmakers visit the Ministry of Education yesterday to complain about the right-wing history textbook approved by the government in August. [NEWSIS]

Controversy is flaring over a new history textbook written by a conservative group of historians that was approved by the Korean government on Aug. 30.

Critics say the textbook - written by historians who mostly belong to the Association for Contemporary Korean History, which is a right-wing history research society - is based on the notion that Korea’s modernization was brought about by Japanese colonial rule and U.S. aid, while diminishing the roles of independence fighters and nationalist leaders like Kim Koo (1876-1949) and the democracy movements between the 1960s and 1980s.

As the debate heats up, the Ministry of Education announced it will push for revisions of eight history textbooks it approved in August by the end of October.

A group of senior historians - including former Education Minister Lee Don-hee - held a press conference yesterday saying there was no need for the book to become a source of political bickering, and while it may not be perfect, it has no major flaws educationally.

“Textbooks are written by certain standards, so there is no room for gibberish,” Lee Joo-young, an honorary history professor at Konkuk University, said. “It is now up to history teachers to decide whether or not they will adopt the version.” Eight history texts passed government screening in August including the controversial book.

The Korean Federation of Teachers’ Association, a conservative group of teachers, released a statement saying attempts to use a book that passed government screening as a political tool should stop.

Speaking at a lecture for the ruling Saenuri Party yesterday, one of the authors of the book, Professor Lee Myeong-hee of Kongju University, said he considers attacks on the book “an attack from the leftist forces.”

“With the current textbooks on Korean history,” he said, “it’s hard to have a positive attitude about Korea and see a future for the country.” He called on the government and the National Assembly to respond appropriately. Meanwhile, a group of lawmakers belonging to the main opposition Democratic Party paid a visit to Education Minister Seo Nam-soo yesterday, demanding that the minister cancel the approval for the textbook within this month.

Yoo Ki-hong, a DP lawmaker, told reporters after meeting Seo that the minister said he will make a decision after seeing revisions made to the book. But Yoo said schools have to decide on their textbooks in October, and if the minister didn’t cancel the license they would “take legal action.”

A couple of hours later, the minister held a media briefing saying, “As the importance of history textbooks has been strongly highlighted recently, the ministry will re-examine the content of all eight textbooks and push for revisions.” 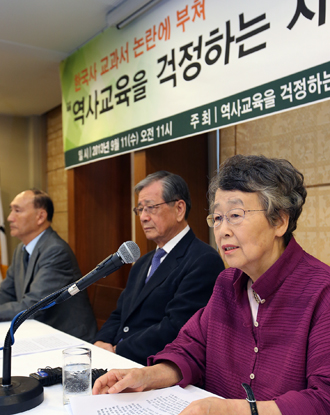 A group of senior historians yesterday hold a press conference denouncing the political attack from left-wing media and scholars. By Park Jong-keun

He added that the ministry will also push back the date by when schools must order textbooks to the end of November, from Oct. 11.

DP lawmakers said the textbook glorifies dictatorship and takes the side of Japan even more than the most right-wing Japanese history textbooks. They say the book describes Japanese soldiers’ massacres of Korean militia as “punitive actions” or “mop-up operations.”

Ideological issues aside, the problem of teenagers’ indifference to or misconceptions about Korea’s modern history has become a social issue.

A recent survey showed that a majority of teenage students in South Korea believe the 1950-53 Korean War was started by the South invading the North. That prompted President Park Geun-hye in June to publicly lament the lack of history education and distortion of history in schools.

Park vowed to correct the problem. “Teachers can have different teaching methods based on their own philosophies, and I believe diversified methods are also desirable,” Park said. “But truth and history must never be distorted in classrooms.”