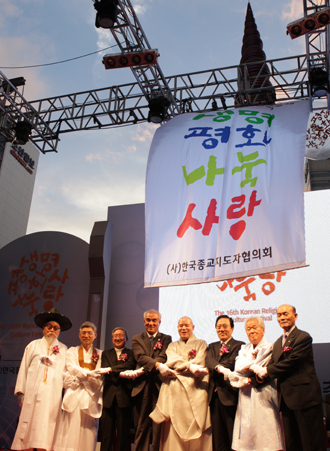 Religious leaders announcing the beginning of the Korean Religious Culture Festival last year at Cheonggye Plaza in central Seoul. Provided by the organizer

Although Buddhism is the major religion with the longest history in Korea, having been introduced back in A.D. 372, the peninsula has a large amount of religious diversity - which will be on display this Saturday in central Seoul.

With the tagline “Love as much as you can,” the religious festival provides a chance for people to experience and understand the major religions of Korea: Buddhism, Won Buddhism, Catholicism, Protestantism, Confucianism and Cheondogyo, as well as smaller, local religions.

Cheondogyo is a religion founded in Korea, and it literally means “religion of the heavenly way.” It is based on Donghak, an academic movement founded in 1860.

The festival, organized by the Korean Council of Religious Leaders, is packed with diverse offerings, including concerts, dancing, a magic performance and talks by religious leaders.

Various events will take place simultaneously at the festival, but the highlight for many will be being able to talk to senior religious leaders face-to-face. Festivalgoers can drop by the booths for each religion and faith. There will also be psychological counseling sessions.

The religious talks and counseling will take place between noon and 5 p.m., and you can sign up for them on the spot.

Another fun part of a religion festival is checking out the differences in each religion’s culture, such as the robes worn and items used at services.

The festival will also offer hands-on experiences, such as a chance for young visitors to make rosaries.