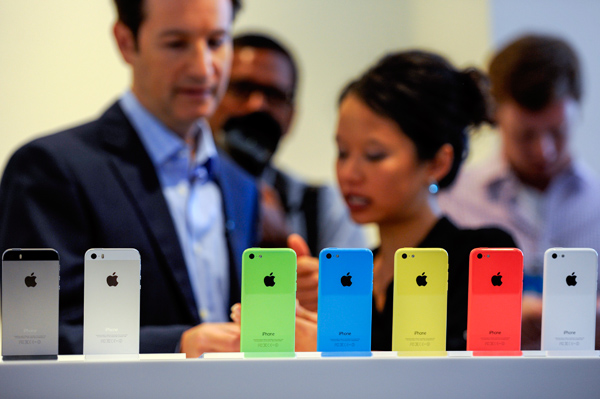 Attendees looking at the new Apple iPhone 5C at a product launch in Cupertino, California, on Tuesday. [Bloomberg]

Apple, the company that pioneered the era of mobile touch-based computing with the iPhone’s 2007 debut, is taking more cues from the competition.

In a break with the past, when the company introduced one iPhone a year, Apple Tuesday unveiled two new models. The iPhone 5C will cost $99 to $199 with a wireless contract and comes in five different colors. A high-end iPhone 5S with fingerprint-security features, a speedier processor and better camera will cost $199 to $399 and be available in three colors.

The devices underscore the new normal in the $280 billion smartphone industry, as the novelty of Internet-connected handsets wears out and the gadgets share many of the same basic features. Facing increasing competition from rivals such as Samsung Electronics that offer mobile phones in different styles and prices, Apple Chief Executive Officer Tim Cook is following suit and expanding his company’s own lineup.

“We’ve gotten through the first phase of the industry,” said Benedict Evans, a mobile-phone industry analyst at Enders Analysis. “The original vision has been built out. We’re now in a market where Apple is fighting on more equal terms.”

Apple’s strategy shift includes what is essentially a repackaging of last year’s iPhone 5 in a new polycarbonate casing that comes in blue, pink, green, yellow and white to become the iPhone 5C. The company isn’t pricing the 5C as cheaply as competitors’ handsets, with the phone costing $549 and up without a two-year contract, according to Apple’s U.S. Web site, showing it’s unwilling to trade its industry-leading profit margins for increased market share.

Apple fell 2.3 percent to close at $494.64 in New York after the announcement as investors expected a lower price for the iPhone 5C to appeal to more customers in emerging markets like China.

“Nobody expected it to be this high,” said Brian Blair, an analyst at Wedge Partners who attended the Apple event. “They are clearly saying we aren’t willing to go downstream.”

The shift in iPhone strategy is a turnabout for Apple, which has long been the pacesetter in the smartphone market. After Apple cofounder Steve Jobs unveiled the iPhone in January 2007, he upended a market dominated by Nokia Oyj’s feature phones and BlackBerry’s keyboard handsets.

As the iPhone gained in popularity to become a pre-eminent computing device for consumers - catapulting Apple’s stock to make it the world’s most valuable company - Google pushed its Android software with Samsung, HTC and other handset manufacturers who soon produced touch-screen devices.

Each iPhone unveiling is critical for Apple because the smartphone accounts for about half its revenue. Tuesday’s event was the company’s first major product debut since the iPad mini was introduced last year. Absent new gadgets, Apple’s growth has stagnated, with earnings falling last quarter.

Apple is responding with the new iPhones, which debuted in front of a crowd that included Apple board member and former Vice President Al Gore, Yahoo! CEO Marissa Mayer and Twitter cofounder Jack Dorsey. Musician Elvis Costello also played toward the end of the event.

The new iPhones will hit stores on Sept. 20. The iPhone 5S will come in white, black and gold and has a 64-bit chip that the company said will make it work twice as fast as the iPhone 5. It will also have Touch ID fingerprint-sensor technology that is located on the phone’s Home button, which people can use to unlock their phone and confirm purchases from iTunes and Apple’s app store. Without a contract, the 5S costs $649 to $849, according to Apple’s online store.

Apple also revamped its mobile software with the introduction of iOS 7, which will be available for free starting Sept. 18.