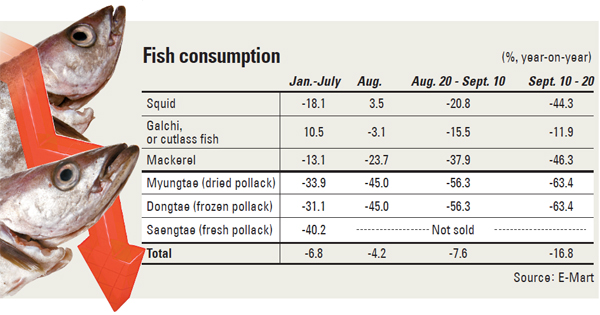 A large discount store was selling dongtae (frozen pollack) caught in Russian waters at 1,100 won ($1), half the normal price on Tuesday.

“I’m afraid to buy even myungtae (dried pollack) after hearing rumors that 90 percent of myungtae consumed in the domestic market is Japanese. I plan to skip making dongtae pancake for Chuseok,” said housewife Kim Sung-mi, 45.

Dongtae restaurants also are experiencing a lack of business.

“Only a quarter of customers compared with last month visit during lunch. As people think dongtae comes from Japan, we actually gave up the business this year,” said 55-year-old Park Hyung-sook, who runs a Dongtae restaurant in Bukchang-dong, central Seoul.

Sales of Russian dongtae, which account for 97 percent of domestic pollack consumption, have been hit by the latest radioactive contamination reports from Japan. Fish from Hokkaido are still available at Korean markets.

Pollack is a coldwater fish not caught in Korean waters. Although Japanese pollack from Hokkaido accounts for only 2 percent of the 260,000 fish sold in Korea each year, consumer anxiety continues to grow and dongtae sales shrink.

At large discount store chains, sales of myungtae have been half of normal levels. According to a sales breakdown by E-Mart, Lotte Mart and Homeplus, sales of myungtae declined 45 percent to 66 percent from Aug. 1 to Sept. 10 compared with the same period last year.

Large discount chains stopped importing sangtae, or fresh pollack, from Japan immediately after the Fukushima disaster in March 2011 and have been selling Russian dongtae.

Yet consumer demand has dropped significantly since July not only because of radiation contamination concerns.

The price of one myungtae has soared 24 percent to 2,462 won from a year earlier, according to the Korea Agro-Fisheries and Food Trade Corporation, as Russia said it would crack down on Korean fishing vessels in Russian waters.

“We sold about 10 myungtae per day last September. This year, we barely sell five fish a day,” said 33-year-old Choi Hyun-suk, who is in charge of seafood at a large discount store. “As there are no consumers trying to purchase dongtae or myungtae, some are even considering not selling the fish.”

Finally, the fishing industry also is suffering financial difficulties due to poor sales of myungtae.

While the monthly sales of Sajooyang Corporation, the No. 1 company in the industry, between January and July this year were 1,230 tons, it stood at 14 tons last month, only 11 percent of that of the previous month.

Although 2,398 tons of products from the Northwestern Bering Sea were received, there were no bidders and it was left stacked in the warehouse.

“Due to spreading rumors on SNS, our revenues have been increasingly declining. Dongtae coming into the country are caught in an area more than 5,000 kilometers (3,106 miles) away from the Japanese nuclear power plant,” said Lee Chang-yeol, director of Dongnam Corporation.

The National Fisheries Research and Development Institute again offered reassurances Tuesday that no radiation has been detected since it began conducting the radiation tests on dongtae from fishing vessels.

The Korea Overseas Fisheries Association also said no radiation has been detected in the thorough radiation inspection by the government such as the Ministry of Food and Drug Safety and the National Fisheries Products Quality Management Service on the number of dongtae being caught in Russian waters by Korean fishing vessels.