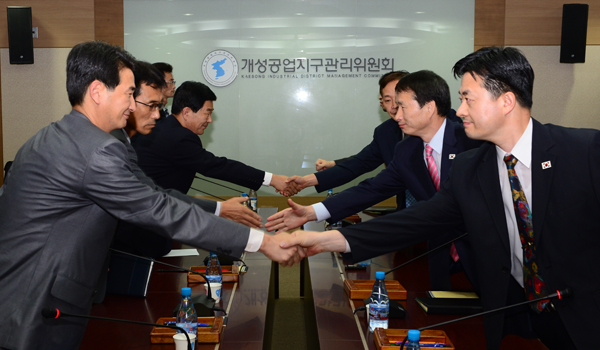 Negotiators from the two Koreas shake hands Tuesday night after ironing out the agreement to restart the Kaesong Industrial Complex. [NEWSIS]

After five months of wrangling, South and North Korea yesterday agreed to restart production at the Kaesong Industrial Complex on Monday.

The Ministry of Unification said yesterday that following an epic 20-hour negotiating session at the factory park, which went through yesterday morning, the two sides agreed to restart the joint venture industrial park with trial runs of assembly lines Monday.

“From the agreements reached through the second joint committee meeting, [the two Koreas] have agreed on what measures to be introduced in order to make the Kaesong complex internationally competitive and develop it with stability safeguards in place,” said the ministry in a statement released yesterday.

The park has been closed since North Korea withdrew its 53,000 workers on April 9. Pyongyang cited military provocations from Seoul and also said it was insulted by news reports that predicted it would never be able to afford pulling the plug on the park because of the foreign exchange it earned from it. 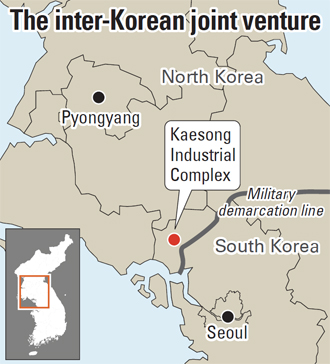 The meeting Tuesday and Wednesday was the second held by the joint South-North committee for the Kaesong Industrial Complex. Seoul’s chief negotiator leading a five-member delegation was Kim Ki-woong. His North Korean counterpart was Pak Chol-su. The two chief negotiators had faced off earlier during multiple rounds of talks to reopen the venture.

Seoul and Pyongyang also reached an agreement to establish a permanent secretariat under the joint South-North committee this month to run the park. Previously, the park was run by North Korea’s General Bureau for Central Guidance to the Development of the Special Zone.

The Park Geun-hye government hopes a joint committee will prevent any kind of unilateral decision affecting the park by Pyongyang in the future.

The ministry in charge of inter-Korean relations said that in order to attract investments from outside Korea to the park, a subcommittee for its global competitiveness will host an investment briefing session next month for foreign companies stationed in the South.

“Some [foreign] companies expressed interest in the Kaesong complex but were also hesitant to make investments because of risk concerns and the fact that the Internet was not available there,” said Kim Ki-woong during a press briefing yesterday at the Unification Ministry.

The chief negotiator said the two Koreas will continue discussions over allowing businessmen to use mobile phones and the Internet at the park. He said the South wanted to set up an Internet connection there within this year.

“In regard to investment safeguard issues, the South and North will continue to push for improving existing measures to protect investors,” said Kim. “We hope [foreign] companies that have shown interest [in making investments in Kaesong] will be more encouraged with the provision of the Internet.”

To help South Koreans who faced losses from the five-month shutdown, Kim said the two sides agreed to waive the companies’ tax obligations for this year and delay their 2012 tax payments until the end of the year.