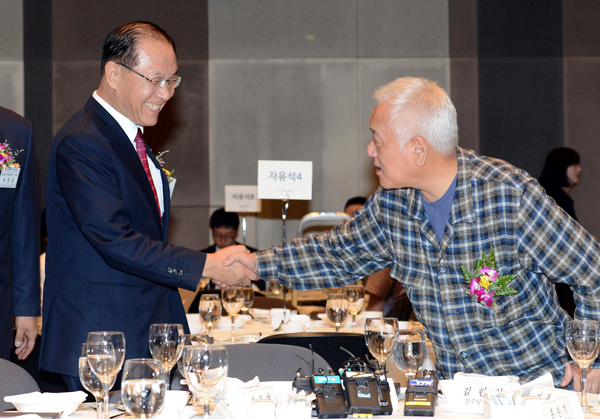 Hwang Woo-yea, left, chairman of the Saenuri Party, greets Kim Han-gill, chairman of the Democratic Party, yesterday at the 49th anniversary celebration of the Korea Copy Editors Association at the Korea Press Center in Seoul. [NEWSIS]

With President Park Geun-hye’s return from an eight-day trip to Russia and Vietnam yesterday, attention is turning to whether she will cooperate with the opposition Democratic Party in an investigation of the National Intelligence Service. The agency has been accused of meddling in the 2012 presidential election and promoting her bid for the office.

Members of the DP continued to protest yesterday at a tent they set up in front of Seoul City Hall, calling on Park to apologize and reform the spy service.

“The president has a lot of things to decide as soon as possible,” the party’s leader, Kim Han-gill, said at a meeting of his senior aides in the tent yesterday. “She should apologize for the NIS scandal, express her will to reform the agency, and seek the truth about the allegations and punish those involved in the case.”

But he added, “if the president makes a decision for democracy,” the DP members will “sincerely cooperate” with her over state affairs.

The president’s party, the Saenuri, controls the National Assembly and has rebuffed most of those demands. But as the assembly’s paralysis drags on, there are some signs of flexibility emerging.

“It is not a good thing to see when the head of the largest opposition party is living in a tent leaking rain today,” Representative Chung Mong-joon said at a meeting of senior Saenuri Party members yesterday. “Our people expect us to play an active role as the governing party; we should prepare a dialogue with the opposition and persuade the Blue House to join.”

Representative Lee Jae-oh agreed, saying that with power came responsibility and that applied to both the Saenuri Party and President Park.

Representative Choi Kyung-hwan, the party’s floor leader, offered to try to woo the DP back to work and arrange a meeting with the president. But he also warned the opposition to stop playing politics.