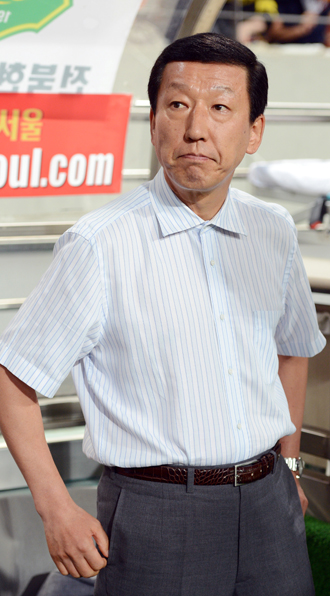 Time has proven to be a great healer for Choi Kang-hee since the former beleaguered coach left the helm of the national team after winning a berth to the World Cup. Now, he will try to quicken his own recovery by bagging another title for his club, the Jeonbuk Hyundai Motors.

Jeonbuk will clash with the Busan I’Park in the semifinals of the 2013 K-League FA Cup on Sunday, while the Pohang Steelers and Jeju United clash in another semifinal match tomorrow. If Jeonbuk gets past Busan and wins the final, slated for next month, it will be Choi’s second FA Cup title after 2005, when he first took the reins of the Motors.

The 54-year-old Choi built one of the most colorful careers as a coach in the domestic league, having won the Asian Football Confederation’s Champions League in 2006, (Jeonbuk finished as runners-up in the 2011 ACL), and having won the K-League in 2009 and 2011.

That leadership, however, was misdirected and misunderstood at the national team, where his 18-month-long stint was hardly seen as a success by many critical local football fans. Korea clinched its eighth successive World Cup berth in June, leading Uzbekistan only on goal difference.

The pressing public expectations have shifted to Hong Myung-bo since he took over the top job on the national team from Choi in June, and Choi has rejuvenated himself with his success at Jeonbuk.

Since Choi’s return to the club in June, the Motors have won 10 games in the league, including two FA Cup games, while losing twice and drawing four times. (They lost, 2-1, to Olympique Lyon in a friendly match in France on July 20.) The Motors are now in fourth place in the league, trailing the league-leading Steelers by only three points.

Choi, who led the club to finish as runners-up in the league last year, revealed in July that he also aims to win another FA Cup title after Jeonbuk advanced to the quarterfinals with a 1-0 win over Ulsan Hyundai.

Jeonbuk exchanged a win and a loss with Busan this season, with the visitors winning each match. The FA Cup semifinal with Busan on Sunday will be held at the Busan Asiad Main Stadium.

Winning the FA Cup title may be the only chance for Choi to save face as Jeonbuk has a tough road ahead without Lee Dong-gook, who is virtually lost for the season with a knee injury. The 34-year-old striker suffered ligament damage on his right knee during an away match with FC Seoul on Aug. 28. The injury didn’t require surgery, but doctors ordered him to rest for six weeks, and Choi said that it is unlikely Lee will return before October. Since Lee’s injury, the Motors have won only once, while drawing twice and losing once.

One solace for the team is Kevin Oris, a Belgian striker who is filling the vacuum left by Lee. Oris scored 13 goals this season, which put him third in the league after Pedro of Jeju United (16 goals) and Kim Shin-wook of Ulsan (15 goals). He scored Jeonbuk’s first goal in a K-League Classic match with Incheon United on Wednesday, before Kim Jae-woong struck the second-half equalizer, ending the game in a 1-1 draw. That draw dragged down Jeonbuk to fourth on 49 points, a point behind Seoul, which thrashed the Steelers, 2-0, on Sunday.

“Kevin is a strong player mentally,” Choi said. “Since Lee’s injury, he has shown a stronger responsibility.”

The other FA Cup semis between the defending champ Pohang and Jeju is a replay of the 2012 FA Cup semis, in which Pohang beat Jeju, 2-1, to set up the final with Gyeongnam FC. Pohang beat Gyeongnam, 1-0. The latest match will be held at Jeju World Cup Stadium at 3 p.m. tomorrow.

For Jeju, it is the only way left to play for an Asian title.

Jeju finished ninth in the first half and is now playing in the lower-ranked Group B, where the seven bottom teams in the 14-strong league are vying to avoid two-team relegation at the end of the season. Only the top three teams in Group A - or four if one of the top three teams happens to be the FA Cup winner - will get an automatic berth to the 2014 ACL.

Jeju will enter the FA Cup match against Pohang with a 2-1 victory over the Daejeon Citizen in the K-League Classic match on Wednesday, which put Jeju top of the table in Group B. Seongnam Chunma is trailing Jeju by two points.