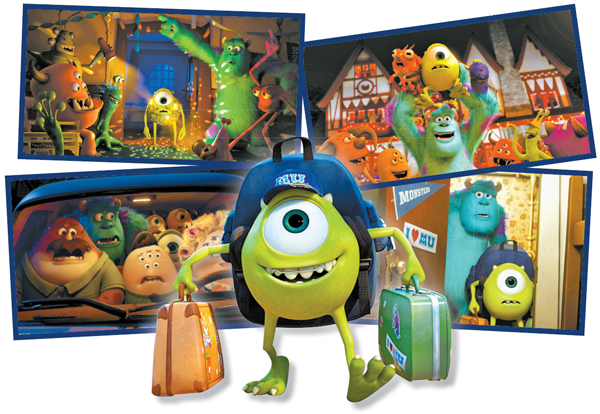 “Monsters University” tells the story of Mike and Sully’s college days before they joined the scaring business. Provided by Walt Disney Company Korea

Twelve years after the world fell in love with the adorable monsters Sully and Mike, Pixar has finally delivered a second installment.

To promote the film, director Dan Scanlon and producer Kori Rae paid a visit to Seoul last week, explaining why it took so long to bring about a prequel.

“We always wait for a good idea,” said Rae, stating that the company wasn’t interested in churning out one sequel after another just because it could.

“As soon as we wanted to come back to the monster world, we really wanted to explore the relationship [between the two characters] more. We wanted to revisit that and explore it a little further.”

The heart of Pixar’s 14th release lay in getting the setting right: Monsters University.

“Because it’s been a while since we graduated from a university, we had to do thorough research,” said Scanlon.

Rae said they toured universities around the country, mostly on the East Coast, as well as some in California where Pixar is. “Story artists, production designers, director, producer, and key crew members all went on tour to get a look and feel for the sake of authenticity,” said Rae.

After grasping just how classrooms, buildings and messy dorm rooms look and feel, Scanlon said the ultimate challenge was the process called “monsterizing.”

“It’s something we did first. Making buildings and sets bigger and stronger to accommodate monsters of all shapes and sizes,” he said.

There were also many minor touches to complete the process, such as adding fans, horns and claws to doors, buildings and windows.

“If possible, we added faces to buildings to make it look scarier,” Scanlon said. “Even trees have scales, if you look closely.”

Then there were the students to create - jock monsters, nerd monsters, goth monsters and all the other student types.

The end result: “We came up with over 300 background monsters,” boasted Scanlon.

The heros of “Monsters University” are a bit different from the first go-around, too.

“Mike is slimmer, brighter, eye a little bigger and wears a retainer,” explained Rae. “Sully is not as big, shoulders not so broad and not yet bulked up to be the superstar scarer.”

With the setting and characters complete, then came the fun part - storyboarding.

“We drew every frame of the movie, so we can place these sideboards side by side to see how it unfolds,” Scanlon said.

It was no quick job, as there were 227,000 storyboards created, the “most ever at Pixar,” according to Scanlon.

As the story progressed, it changed focus slightly from Sully to Mike.

“Initially, we tried to make it about Sully, but we realized that this story was Mike’s,” said Rae.

Although there was some pressure and doubts about how the prequel would stack up against the original, the duo said that they put their focus on telling a story.

“Prequels are tricky, trying to tell a story that is its own film is a challenge,” said Scanlon, while Rae added that that’s why they worked hard to dig deep, “to uncover stuff about the characters you never knew.”

Ahead of the Korea release yesterday, the film already broke the $700 million mark worldwide last month, becoming the fourth-biggest film this year and the fourth-biggest Pixar movie ever, following “Toy Story 3,” “Finding Nemo” and “Up.”