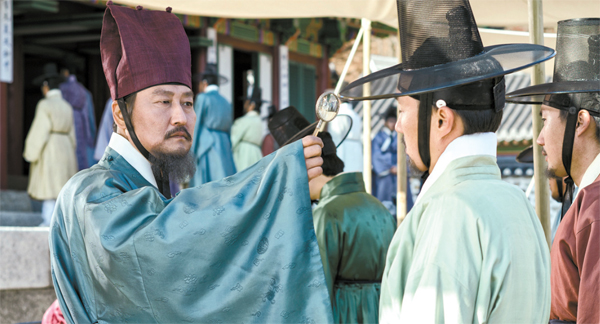 Song Kang-ho stars in “Face Reader” as Nae-kyung, a man with a special gift for knowing people just by examining their heads. Provided by Showbox

With an all-star cast like Song Kang-ho, Lee Jung-jae, Baek Yoon-shik and Kim Hye-soo, you might think “Face Reader” has the makings of a hit - and you’d be right.

Set in the Joseon Dynasty (1392-1897), “Face Reader” is a tragic yet moving story about a group of people whose destinies are intertwined around a man with a nearly magical ability to read faces.

The face reader in question, Nae-kyung (Song), has been living a humble life in the mountains with his son (Lee Jong-suk) and brother-in-law Paeng-heon (Jo Jung-suk), when Yeon-hong (Kim), madame of a well-known brothel in the capital city Hanyang comes offering a business proposal.

Tempted by the possibility of turning things around for himself and his son and brother-in-law, Nae-kyung sets out for the capital.

Once there, it’s not long until Nae-kyung’s knack for reading faces and the future is discovered by members of the royal court. After a few twists and turns, Nae-kyung is brought to the court to advise the king and high-ranking officials.

The first half of the movie is full of laughs, in particular Paeng-heon as a fish-out-of-water in the big city.

But all good things must come to an end, as troubles close to the king begin to loom over Nae-kyung, too. Before long, Nae-kyung finds himself in the middle of a power struggle between Grand Prince Soo-yang (Lee Jung-jae) and the faithful scholar Kim Jong-seo (Baek).

Although the plot is somewhat predictable, the storytelling is done with style and all the actors bring much nuance and depth to their roles. In particular, Kim and Lee are riveting as ambitious, calculating and charismatic characters, both bringing unique forms of charisma.

Song, as always, has a strong presence on screen, displaying an array of emotions and behaviors, sometimes lazy, others drunk, but more importantly a father who is willing to put his life on the line for the sake of his only son. Paeng-heon, Nae-kyung’s brother-in-law and sidekick, brings humor, while bad boy Prince Soo-yang is a forceful villain, as fascinating as he is cruel and scary. Newbie Lee Jong-suk also proves his worth as a rising Hallyu star.

In addition to the superb casting of some of Korea’s finest actors, the cinematography, costumes and set designs are also truly delightful. The pace of the story - galloping toward doom - is fast enough to keep the viewers attuned.

However, it does not take a magical face reader to guess how this tale will unfold, and most viewers will be able to guess the ending.

Although the movie kicks off with laughs, it’s not long before jokes give way to a more sinister, action-packed sequence of events. But unlike the non-stop frenzy of summer blockbusters, there is thoughtfulness and nuance in “Face Reader” that lurks behind each pull of the bow and swipe of the sword.

The movie transcends just the subject of reading character and faces, touching on the value and significance of family. The irony of subscribing to a world belief system based on destiny is questioned and the ending leaves viewers wondering about whether the story was really fate or a series of self-fulfilling prophecies. Or, as Nae-kyung puts so eloquently, “knowing how high the waves will be don’t stop them from crashing down.”

“Face Reader” is a superb tale that asks big questions about life but also highlights the mundane, precious moments that inevitably lead to death.