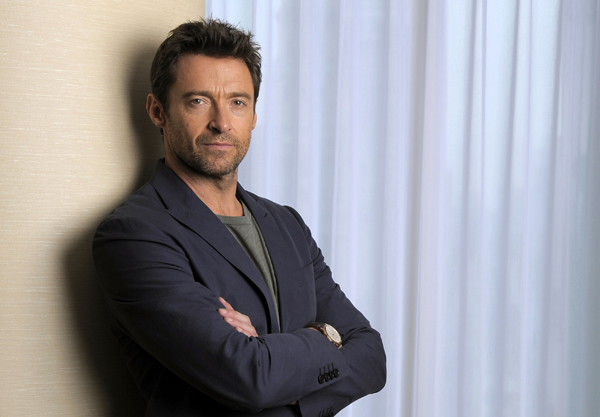 Hugh Jackman, a cast member in the film “Prisoners,” from Sept. 7 at the 2013 Toronto International Film Festival in Canada. [AP/NEWSIS]

TORONTO - Hugh Jackman may spend an inordinate amount of time playing a mutant weasel superhero, but even the Australian actor realizes his image is somewhat deranged.

Whether it’s because he hasn’t shied away from musicals, on Broadway and in “Les Miserables,” or because Jackman happens to be a charmingly upbeat family man, he isn’t typically the first candidate to play a rage-spewing, formerly alcoholic survivalist.

That’s his character in the kidnapping drama “Prisoners,” which debuted at the Toronto International Film Festival and will be released by Warner Bros. on Sept. 20. It’s a new kind of role for Jackman: A rampaging father trying to find his young, missing daughter at all costs.

“I’m always looking to push the boundaries of what people think I should be doing or can do,” said Jackman in an interview.

But his years-long circling of the part speaks to his strong desire to upend audience expectations.

“For an actor,” he says, “it was one of those parts where you go, ‘OK, this is something I haven’t done before, this is going to stretch me.’ It’s asking for a sustained intensity that I haven’t had before.”

The film, directed by Quebec filmmaker Denis Villeneuve (“Incendies”), is about the frantic search for the kidnapper of two girls. When the chief suspect (Paul Dano) is released from custody by the police detective in charge of the case (Jake Gyllenhaal), Jackman’s father pursues and tortures him.

“He just felt it was the perfect timing for him after playing the superhero and playing the nice guy a lot,” says Villeneuve. “He’s a very, very powerful and strong actor. He was ready to go there.”

It’s a clear allegory for political issues, brought into a domestic setting. Gyllenhaal, whose pursuit is rational and methodical next to Jackman’s furious, morally questionable mania, says of the two characters: “We are the right and left side of the brain of this film. We are the head and the heart.”

Jackman, the father of two children with his wife, Deborra-Lee Furness, researched the part by learning about kidnapping experiences and the mentalities of survivalists. Though he drew on his own experiences as a parent, Jackman favored an acting approach that looked outside himself.

“It’s dangerous to constantly dredge up your own family thing,” says Jackman. “The bottom line is, actors will do whatever it takes. But if you can possibly get there without doing that - just using your imagination. Obviously, if you’re only going to use your life experiences, you’re limited.”

But the 44-year-old actor, who will play Wolverine for the seventh time in next year’s “X-Men: Days of Future Past,” keenly recalls the few times his children have, for even a moment, been hard to find. Once, he was at Sydney’s Bronte Beach when his son was suddenly nowhere to be seen.

Panic started to set in. Making the situation all the worse was that paparazzi were there taking his photo. As Jackman paced between a playground and the beach, he ignored their shouts.

“Finally, this guy goes, ‘Hugh, he’s in the tree!’” says Jackman. “I’ve never been so happy to have paparazzi follow me. I said: ‘Whatever you need.’”