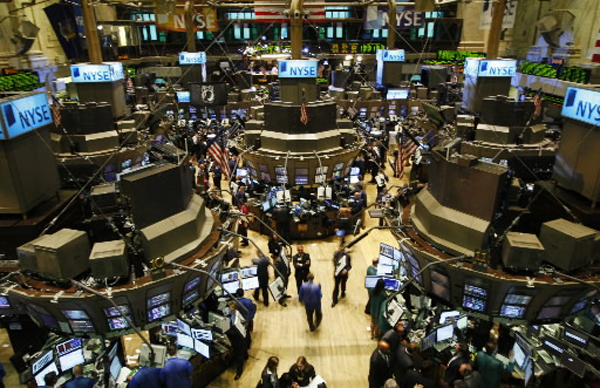 The New York Stock Exchange on Sept. 15, 2008, when stocks tumbled as the bankruptcy of Lehman Brothers fueled turmoil worldwide. [BLOOMBERG]

Though countries around the world put their heads together both in the form of multilateral and bilateral cooperation to prevent the crisis from spreading further, analysts note that the global economy - including that of Korea - is still bruised from the impact.

According to a recent report released by the Korea Center for International Finance, the subprime mortgage crisis that began in the United States in 2007 led to the meltdown of the U.S. investment bank the following year and caused a recession and credit crunch.

That was followed by a fiscal crisis in the euro zone. 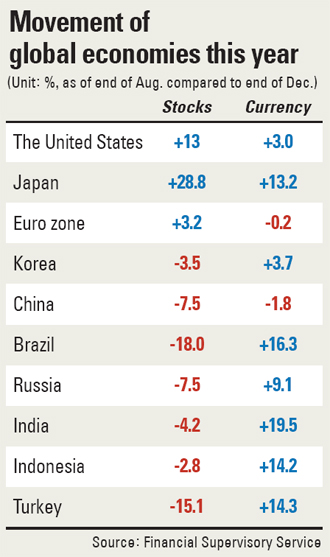 “Now, concerns have appeared over financial uncertainty in emerging countries, with the U.S. expected to begin tapering its quantitative-easing program,” said an official from the center. “It seems as if different forms of crises in the global economy are becoming routine, although they may not be as harsh in terms of impact as the one caused by the bankruptcy of Lehman Brothers.”

The lingering instability in the financial market also has held back economic growth in general.

Data by the International Monetary Fund shows that in the past three years, the year-on-year growth rate of the global economy has remained in the 3 percent range, which is significantly lower than the average 4.2 percent growth between 2000 and 2007. Gross domestic product growth of advanced economies has fallen by more than half. In 2007, their year-on-year growth rate was 2.6 percent, however, this year the IMF projected the rate would fall to 1.2 percent.

Korea also has also been maintaining a slow-growth trend, with this year’s rate projected by the IMF to reach 2.8 percent. The Ministry of Strategy and Finance outlook is 2.7 percent growth by the end of the year.

Local export companies also have been directly hit by the lingering crisis.

“Although Korean exports haven’t been directly affected, for example, by the euro zone fiscal crisis, they have been greatly affected by how China’s exports to the euro zone dropped and so did Korea’s exports to China,” said an official from the financial regulator. “This is why the financial authority and the Finance Ministry should keep monitoring the current economic situations in case of indirect impact.”

The sluggish domestic economy also has affected local industries, particularly shipbuilding, shipping and construction, which has caused deterioration in the soundness of financial institutions. Local banks and insurance companies have been suffering from deteriorating profits due to low interest rates and mounting household and corporate loans. The country’s household debt is about to reach the 1,000 trillion won ($909 billion) mark.

Amid ongoing uncertainties in the global and Korean financial markets, the Ministry of Strategy and Finance and the Financial Services Commission have repeatedly emphasized that the fundamentals of the Korean economy are strong and the situation is different from those in other emerging countries like India and Indonesia that are being badly affected by global financial uncertainties with roots in the 2008 global financial crisis.

“Though international financial markets are showing signs of uncertainty with concerns over the U.S. Federal Reserve’s anticipated tapering of its stimulus measures, the Korean financial market is quite stable,” said Kim Yong-beom, a director-general at the FSC.

Recent government data showed that Korea has a current account surplus, while other countries like India, Indonesia, Turkey and Brazil all have deficits.

Also, the percentage of government debt to total GDP is low for Korea at 34.8 percent while the rate is higher for other emerging countries.

“I guess the most pending concern for the Korean economy now would be currency fluctuation as it can hurt local export companies,” said another official from the financial regulator.