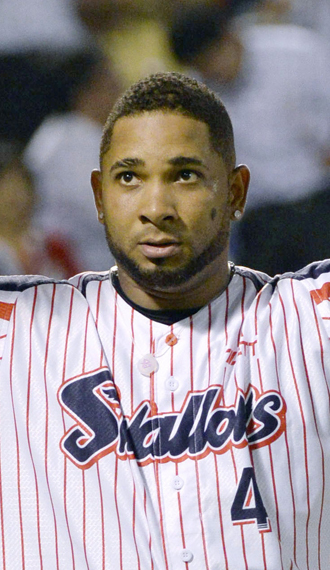 Balentien matched the mark set by Sadaharu Oh in 1964 and equaled by ex-major leaguers Tuffy Rhodes in 2001 and Alex Cabrera in 2002. He has 21 regular-season games left to break the record.

Balentien hit a solo homer in the sixth inning at Jingu Stadium and was given a bouquet of flowers after reaching home plate. Despite Balentien’s home run, the Tokyo Yakult Swallows lost, 6-2, to the Hiroshima Toyo Carp.

“It’s an honor to be tied with such great players,” Balentien said. “I’m relieved and happy I was able to do it here in front of our home fans.”

Balentien, who is from Curacao, played for the Seattle Mariners and Cincinnati Reds before signing with the Swallows in 2011. He hit 31 homers in each of his first two seasons in Japan.

Rhodes and Cabrera tied Oh’s record with several games left but were then walked more and were unable to break it.

Oh is a legend in Japan. His 868 career home runs, which surpassed Hank Aaron’s then-major league record of 755, made him a national hero.