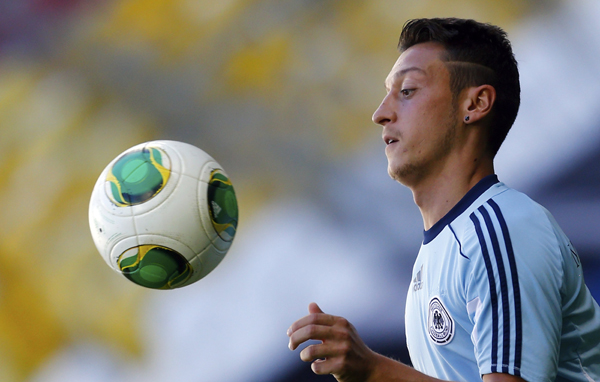 Mesut Ozil during a training session for the German national team in Munich on Sept. 5. [REUTERS/NEWS1]

LONDON - Arsenal fans waited a long time for a big summer signing, and when the club smashed its transfer record on Mesut Ozil on deadline daythe international break meant another delay before they could feast their eyes on him in club colors.

The Germany international, signed from Real Madrid for ￡42 million ($66.03 million), was a huge coup for manager Arsene Wenger and after scoring in a World Cup qualifier in the Faroe Islands in midweek Ozil is set for his debut at Sunderland on Saturday.

England’s northeast coast is a little more hospitable than windswept Torshavn but nevertheless Ozil will quickly learn about the physical demands of English football against a Sunderland side desperate to kick-start their season.

Ozil is not the only player anxious to make an instant impression for a new club as the domestic season swings back into action after World Cup distractions.

Marouane Fellaini will be eager to pull on a Manchester United shirt for the first time after his ￡27.5 million deadline day move from Everton.

Like Arsenal, United were quiet in the transfer window but the introduction of Belgian midfielder Fellaini will give David Moyes’ side some added venom as they host newcomers Crystal Palace at Old Trafford, having managed only one win from their opening three Premier League games.

Everton will have Gareth Barry (on loan from Manchester City) in their ranks as they take on Chelsea, although striker Romelu Lukaku will not make his debut because of Premier League rules on loaned players playing against their mother club.

Ozil’s departure from Real Madrid after the Spanish giants’ world record signing of Gareth Bale for €100 million ($133 million) raised plenty of eyebrows across Europe and even Arsenal’s Santi Cazorla admitted being surprised he had been allowed to leave.

“I don’t understand that [why Real Madrid sold him], he is a unique player.

“You will have to ask the club for reasons why they sold them, but at the same time he didn’t think he was getting the opportunities he deserved.

“Luckily he has come to us.”