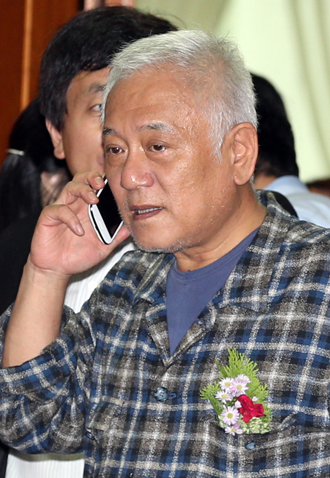 President Park Geun-hye proposed a three-way meeting with herself and the leaders of the ruling Saenuri Party and opposition Democractic Party to break a political stalemate that has paralyzed the National Assembly.

A day after her return from an eight-day trip to Russia and Vietnam, Park made the offer to try to pull the opposition Democratic Party back to the Assembly from their temporary protest headquarters in a tent in front of Seoul City Hall.

For more than a month it has ignored business in the Assembly to force the president to deal with allegations that the National Intelligence Service meddled in the 2012 presidential election on her behalf.

The party had demanded a one-on-one meeting between Park and the DP’s chairman Kim Han-gill.

Lee Jung-hyun, senior secretary to the president for public affairs, told reporters at a briefing yesterday that the president wants to visit the National Assembly for a series of meetings, hopefully on Sept. 16.

According to Park’s proposal, she will first give a briefing about her trip to Russia and Vietnam to the leaders and floor leaders of each of the parties. Afterward, she wants to hold a closed-door three-way meeting with the leaders of the two parties.

“Through the trilateral talks, we hope to discuss all the current affairs that both the ruling and the opposition parties want,” Lee said.

Asked whether Park would bring up the NIS issue at the three-way talks, Lee said she would deal with “everything for the people.”

Asked why she selected the National Assembly as the venue, Lee said the proposal was part of “her will to show cooperation with the legislature.”

Previously, the president offered five-way talks with the leaders and floor leaders of the two parties. But the DP refused that offer.

The DP expressed displeasure with the president’s proposal because it wasn’t discussed with them in advance.

“At around noon today, Kim Ki-choon, the president’s chief of staff, made a phone call to our floor leader, Jun Byung-hun, and notified him of the form and the date of the meeting,” Representative Kim Kwan-young, a senior spokesman of the DP, said at a briefing.

“Kim’s notification and the unilateral announcement by the Blue House did not show respect. It is hard for us to confirm the sincerity of the proposal,” he said. “Jun warned Kim that this kind of unilateral notification would make things more complicated, but Kim just said, ‘I should obey the order of my superior, and I can’t say anything else.’?”

“The issues we want to discuss are so clear,” Kim said.

The Saenuri Party hailed the president’s offer as being something special.

“This is literally shocking,” Representative Choi Kyung-hwan, floor leader of the party, told the JoongAng Ilbo. “To normalize operations of the legislature, the president offers to come to the Assembly in person. If the opposition party turns down this offer, they will have no justification [for their protest].”

Ruling party members have been in a hurry to discuss a number of bills since the September regular session started on Sept. 2, but the DP has demanded the president show some sort of “responsible act” for the NIS case, such as an apology or punishment of officials involved in the case.