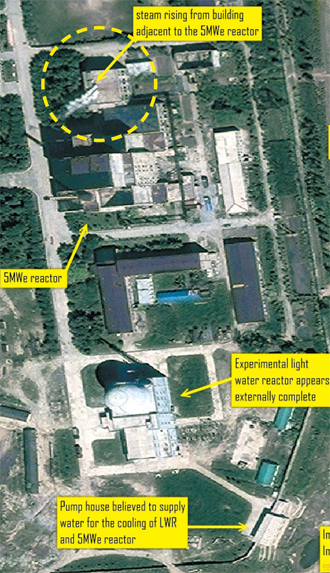 The U.S.-Korea Institute at Johns Hopkins School of Advanced International Studies said a satellite image from Aug. 31 shows white steam rising from a building next to a 5-megawatt reactor.

The building houses steam turbines and electric generators driven by heat generated by the reactor, said the report from the institute’s North Korea analysis division, 38 North.

“The white coloration and volume are consistent with steam being vented because the electrical generating system is about to come online, indicating that the reactor is in or nearing operation,” the report explained.

The original nuclear reactor at Yongbyon produced weapons-grade plutonium for the North’s nuclear weapons. It operated from 1985 to 1994, when it was shut down after the signing of the U.S.-North Korea Agreed Framework.

It was restarted in 2003 and shut down again in 2007 after an agreement at the six-party talks involving North Korea, the U.S., South Korea, Japan, China and Russia. Following the agreement, the reactor’s cooling tower was blown up in 2008.

At the height of warlike rhetoric following its third nuclear test in February, North Korea declared on April 1 that it planned to restart its shuttered Yongbyon facility, including the 5-megawatt gas-graphite reactor.

The 5-megawatt reactor at the Yongbyon nuclear facility is capable of producing 6 kilograms (13.2 pounds) of plutonium a year.

The U.S.-Korea Institute earlier said that Pyongyang did not need to rebuild the destroyed cooling tower but could connect the existing reactor to a pump-house built for its new experimental light water reactor.

Several branches of the government reacted to the report.

“If the 5-megawatt research reactor is operated, spent fuel will be produced,” the South Korean Ministry of National Defense said yesterday, “and if that is reprocessed, there is danger of the amount of plutonium increasing.”

“There is no reason for smoke to come out of that chimney otherwise,” Defense Ministry spokesman Kim Min-seok said at a briefing yesterday.

Foreign Ministry spokesman Cho Tai-young also said at the briefing, “The government is paying sharp attention to the information and following up on that issue.”

“In a sense, we were already warned through North Korea’s April 1 announcement,” said Cheong Seong-chang, senior research specialist on North Korea with the Sejong Institute, a Korean think tank. “The North can have two motives. First, it would be to strengthen its nuclear weapons capability, such as through the production of plutonium. Second, it can use its nuclear facilities as a bargaining chip in the possibility of negotiation with the U.S.”

Cheong predicted there “won’t be a large impact” on thawing North-South relations.“North Korea’s nuclear problem is a security issue linked with the six-party talks,” Cheong said.

“But it will not have a large impact on issues already progressing such as the reopening of the Kaesong Industrial Park or the reunions of families separated during the 1950-53 Korean War, although it may create a negative atmosphere.”

The Washington-based Institute for Science and International Security (ISIS) also released a report Wednesday analyzing the steam rising from the building next to the 5-megawatt reactor.

The ISIS said that North Korea will take at least two to three years before it “discharges irradiated fuel containing plutonium” and another six to 12 months to separate the plutonium.

“There remains time to negotiate a shutdown of the reactor before North Korea can use any of this new plutonium in nuclear weapons,” said the ISIS report.

It added that if the reactor is shut down within the next six months, it “would have produced very little plutonium.”