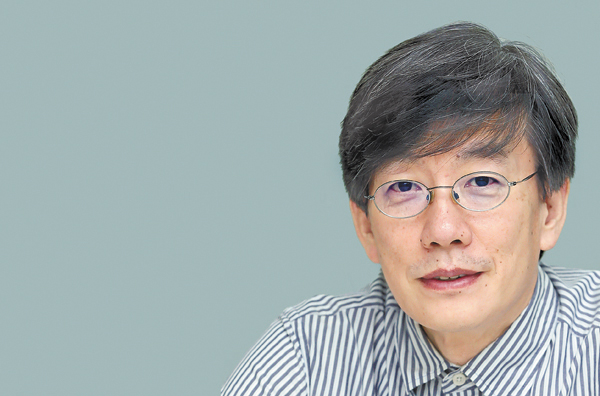 Starting Monday, the JTBC evening news will get a face-lift. The new news anchor, Sohn Suk-hee, is the head of JTBC’s newsroom and will be the central figure on “News 9.”

The 57-year-old journalist made his debut as a news anchor for the Munhwa Broadcasting Corporation in 1984. Until 1999, he anchored several of MBC’s news programs, including a stint as the prime time news anchor. He accepted a supervisory job that year but continued to host a series of public affairs and discussion shows.

Two teasers for his return, produced by JTBC and posted on YouTube, have sparked interest in his debut. Sohn participated in preparing the second teaser, writing his slogan for his broadcasts: “I will make news that fears weak people and makes powerful people fear.”

In recent years, he has been recognized as one of the country’s most respected journalists, known for his balanced and intelligent style as master of ceremonies of Munhwa’s debate programs “Focused” and “100-Minute Debate.” He has also been nicknamed the “awl interviewer” for his probing questions to interviewees. Despite efforts to recruit him into politics, Sohn says he would rather remain a journalist.

In 2006, Sohn left his administrative job at MBC but continued to host the two programs. Last May, he became president of JTBC’s news operation. (JTBC is a part of the JoongAng Media Network, which includes the Korea JoongAng Daily.) He will be the country’s first TV journalist to both head a network division and appear as a news anchor at the same time.

In an interview with the JoongAng Ilbo at his office on Tuesday, Sohn said he has four principles in reporting - fact, fairness, balance and dignity.

“News 9” will air starting Monday Sept 16, from Monday to Friday. Most cable or Internet TV providers carry JTBC on channel 15. For further information on the channel guide, call 02-751-6000.

Q. Expectations are high about your return as a news anchor.

A. I think some people expect, but others are concerned, about me. I know what both the expectations and the concern mean. To some extent I feel anxious, but I also tell myself I should be cautious at this sensitive time.

How do you feel about your return as anchor after 14 years?

When I made my last comments on the debate program “Focused,” I said I would continue to try to push journalism in the right direction. MBC and JTBC might be different, but wherever I have been I have never been in an easy situation.

If you ask me which company I feel the more difficult to work for, I think it would be JTBC. That’s because of criticism of the so-called general-programming cable channels and because JTBC is not as influential as the other main channels, MBC, SBS and KBS. But I will not try absurd things to get ratings. I will stick to my principles.

What is your principle in heading JTBC news?

As I told my senior staff on my first day at JTBC, my principles are fact, fairness, balance, and dignity. We should report facts without hesitation, be fair regardless of the interests of other people, be balanced in our values and not lose our dignity in competing with other channels.

In addition to those four principles, I will take one step forward. I will avoid a mundane reporting style that looks like items displayed on the shelves at a department store and focus on the people in the scene. If necessary, I will allow anyone to come to the studio or connect with him or her online to listen to their opinions and broaden our in-depth reports. You will see totally different news than that you read every day on the Internet.

Another of my mottos is “Be critical in all directions.” Whether the subject is the ruling party or an opposition party, conservative or liberal, all should be subject to criticism. But the premise is “criticism for development.” I don’t condemn or tease anyone with groundless allegations.

Some people say you have changed since you arrived at JTBC.

I have worked on TV in front of people for 30 years. I believe viewers will judge everything about me.

Many people say you appear to be a bit unfriendly.

There are lots of erroneous rumors about me. I put emphasis on team work, so sometimes I make jokes. I don’t hold a grudge against anyone for a long time. When I was in MBC, I angrily complained off camera about some mistakes by my staff, but I quickly joked with them minutes later, which surprised the people I was interviewing.

When you leave JTBC, how do you want to be evaluated by viewers?

When I finish my job here and leave, I want to hear comments like “You did your job.” Whether I succeed or fail here, I want to be remembered as a journalist only.