Prosecutor tells Chosun to meet him in court

Prosecutor tells Chosun to meet him in court 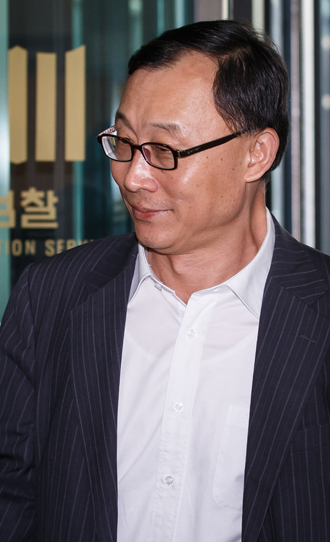 Prosecutor-General Chae Dong-wook, the target of accusations that he had fathered an illegitimate child, began firing back yesterday at the newspaper that carried the charges. He announced plans to file a lawsuit against the Chosun Ilbo, which has not retracted the story but did publish additional information calling the original story into question.

Separately, the political opposition raised additional questions about the matter, based on suspicions that the information supporting the original story came from administration sources eager to discredit Chae, who wants to investigate the National Intelligence Service’s role in the 2012 presidential election.

“We decided to file a lawsuit because the Chosun hasn’t taken any action, even though we asked them on Monday to publish a correction,” said Koo Bon-seon, the spokesman of the Supreme Prosecutors’ Office. “To resolve the matter, we decided to take the issue directly to court instead of going through the Press Arbitration Commission.”

Under the press arbitration law, a media outlet has three days after receiving a demand for the retraction of a story to say whether it will do so or not. Prosecution sources said Chae will file the lawsuit today and will hire two lawyers to represent him.

Koo quoted Chae as repeating his offer to submit to a DNA paternity test.

Last week, the Chosun Ilbo reported that the 54-year-old prosecution chief had a 10-year-old son from an extramarital affair with a woman in July 2002. In a second article, it claimed that the boy’s school records list his father as Chae Dong-wook.

On Tuesday, Chae demanded a retraction, although his first reaction appeared somewhat equivocal.

The Democratic Party, the largest opposition bloc in the National Assembly, jumped into the fray yesterday for the first time. Two party members asked if administration officials may have been behind the original leak to the newspaper.

“The Chosun Ilbo’s Sept. 6 edition mentioned the boy’s certificate of family relationship, his residence address and the specific date that he left Korea for schooling in New York. A later edition claimed that school records named the boy’s father,” two Democratic Party legislators said at a press conference. “That information can’t be obtained without cooperation from government officials. Handing over such information to another person is subject to criminal punishment.”

The Chosun Ilbo said that officials and teachers at the boy’s school confirmed what it printed, but other Democrats were skeptical. One member of the judiciary committee said: “Media other than Chosun said school officials had denied handing over any information about Chae to Chosun. We strongly suspect that the information was leaked from National Education Information System by government officials. This is a serious human rights abuse for the boy and his mother.”

That attack is meant not only to attack the administration, but to support Chae, whom the party sees as an ally in its efforts to bring the National Intelligence Service to heel. After abating its demands for an investigation of the role of the NIS in the 2012 election while the agency was investigating an alleged rebellion plot, the DP resumed its attacks after Chae began fighting the personal allegations about him.