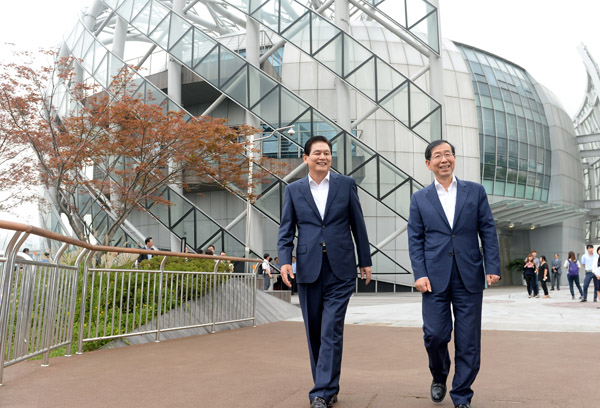 The Han River’s Floating Islands - exhibition and leisure venues that got caught in the crosswinds and currents of Seoul city politics - will float again.

The Seoul Metropolitan Government said yesterday it agreed with Flossom, an urban development company that originally handled the project, to reopen some facilities next month and all of them next year.

The municipal government and Hyosung Group, the mother company of Flossom and the biggest investor in the 139.2 billion won ($130.8 million) project, signed an agreement to restore the islands at the site of the development in the Han River in Banpo, southern Seoul, yesterday.

Starting with an exhibit of about 100 old photos of the Han River, opening Oct. 6, the Floating Islands will come back from a dubious state of neglect and disrepair. Seoul Mayor Park Won-soon said yesterday that they will become a tourist attraction as planned and that locals can also enjoy concerts, exhibitions and aquatic sports at them.

The Floating Islands were the first completed part of the Han River Renaissance, a signature project of Park’s predecessor, former Mayor Oh Se-hoon. Oh planned a cool venue for events akin to Sydney’s Opera House, a touch of modern design floating among the Han’s highways and bridges from the 1970s and 1980s.

They were inaugurated in June 2011 with a high-profile Fendi fashion show.

But in August 2011, Oh stepped down after a bitter battle with liberal politicians over the issue of free school lunches in the city’s schools. Oh held a referendum on the issue, lost and quit. Park was made mayor in a by-election October 2011.

Park criticized Oh’s Han River Renaissance as a “complete waste of taxpayers’ money” and wanted to shut down many of his design-oriented projects in favor of more welfare benefits like the school lunches. As for the Floating Islands, Park argued that the contract with Flossom gave too much to the private company.

The project was basically boarded up when flooding damaged the Floating Islands, and they seemed to have a dim future.

But since then, the city and Flossom have been negotiating a new contract.

The original contract guaranteed Flossom ownership of the Floating Islands for 30 years in return for investing 139 billion won. Ownership was supposed to go to the city afterward.

The revised contract says Flossom will own the islands for 30 years, the length of the 100 billion won loan it took out, but it will have to pay the city to use the facilities for the final 10 years. The government explained that Flossom needed to keep ownership for the full 30 years for financing purposes.

Most of the project was carried out on the build-operate-transfer model, in which private companies shoulder the cost of construction and operate it for a time before surrendering ownership to the government. SH Corporation, a state-run construction company, owns 29.9 percent of Flossom while Hyosung owns 57.8 percent.

Flossom also agreed to reinvest into the project a 9.2 billion won payment given by the government to compensate it for the delay of its opening.

Flossom will pick subcontractors to operate a series of businesses at the islands by the end of the year.

“I’m very pleased that we can normalize the islands for citizens,” Mayor Park said at the signing.